Revenue has agreed to write off some €220,000 in cases it has approved 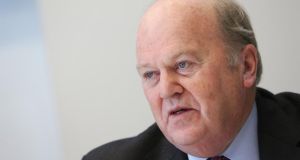 Revenue has declined to participate in 40 per cent of the personal insolvency arrangements (PIA) that have been presented to it, but it has agreed to write off some €220,000 in the cases it has approved.

This figure has emerged from a reply by the Minister for Finance, Michael Noonan, to a question from Fianna Fáil’s finance spokesman, Michael McGrath.

“Revenue has confirmed to me that it has received 85 formal requests to participate in the various personal insolvency options to date,” Mr Noonan said.

The Minister added that, to date, Revenue has formally written off €16,000 in these cases, with a further €204,000 scheduled for write off once the “required legislative requirements and timelines have been adhered to”.

Commenting on the Minister’s reply, Mr McGrath said: “For the insolvency service to become successful, the Revenue will also have to play its part as a creditor and be prepared to accept some losses owed to it by persons who are insolvent.

“This is meant to give people an opportunity for a fresh start by either having their debts restructured or written off. So I welcome the fact that the Revenue has been willing to participate fully in that process and has participated in 50 per cent of cases presented to it.”

In a statement issued to The Irish Times last night, Revenue said it was “fully committed to being an active participant in personal insolvency solutions provided there is honest and open engagement by the parties involved.

“We declined to participate in 34 cases due to insufficient or conflicting information being provided. However, Revenue will re-engage if the missing data is subsequently provided, for example outstanding tax returns.”