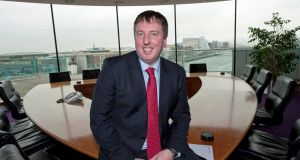 Paul McCann was managing partner of Grant Thornton in Ireland between 2012 and 2017 and is currently a senior partner in the firm’s financial services advisory department.

Permanent TSB (PTSB) has appointed Grant Thornton partner Paul McCann as interim chief financial officer (CFO) as it continues its search for a permanent figure to fill the position.

The vacancy was created after Eamonn Crowley, who joined the group as CFO three years ago, was promoted to become chief executive officer in June. Since then, he has been carrying out both roles.

Mr McCann was managing partner of Grant Thornton in Ireland between 2012 and 2017 and is currently a senior partner in the firm’s financial services advisory department, advising banks, financial institutions and asset management companies.

“Paul’s knowledge and understanding of our business will be a huge asset to the bank and he brings with him a wealth of leadership [and] commercial and international banking sector experience,” said Mr Crowley.

The bank said it is continuing a recruitment process for a permanent CFO. It also must find a new director of operations after current incumbent Shane O’Sullivan, the internal runner-up in the recent search for a new chief executive for the lender, signalled earlier this month he is leaving the company.

Mr O’Sullivan’s plans to quit PTSB at the end of January to pursue “other opportunities” were announced to staff last week. He has been with PTSB for two decades and was given responsibility for the management of its massive bad loans book following the last economic crash.

Last month, PTSB reported a higher-than-expected €75 million charge for the first half of the year to cover an expected surge in bad loans as Covid-19 loan payment freezes of a maximum six months come to an end, and as it cut the value of 340 repossessed residential properties on its books.

Commenting on his appointment, Mr McCann said: “I believe in the bank’s potential for future growth and I look forward to working with Eamonn and the wider team to bring Permanent TSB to its next stage.”

Mr Crowley said in June, as he was unveiled as chief executive, that he plans to redouble the bank’s efforts to crack the small-business lending market and generate more income from fees, as he acknowledged it has “a slightly higher mountain to climb” than rivals in dealing with challenges facing its sector.

PTSB’s SME lending amounted to €47 million last year, having more than doubled off a very low base in 2018. Mr Crowley also highlighted that the bank generates only 10 per cent of its income from fees, compared with 30 per cent at Bank of Ireland and AIB and 20 per cent at Ulster Bank.

1 Hurrah for the companies giving staff more time off
2 RTÉ to seek 70 voluntary redundancies as ‘large costs’ beckon in 2021
3 Some Irish money market funds came close to danger in March
4 Covid-19 will worsen shortage of accountants, says CPA Ireland
5 Sustainable investment: How your pension can help tackle climate change
6 Start-up Loanitt raises €570,000 as it looks to double headcount
7 ‘We lost money on our planned wedding in Spain. Covid saw to that’
8 Aryzta to pursue asset sales as takeover talks fail
9 Samsung patriarch Lee Kun-hee dies at 78
10 How to make the hybrid workforce model work
Real news has value SUBSCRIBE