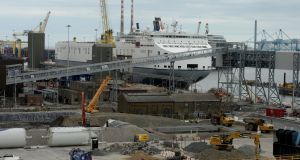 UK-based ship insurer Standard Club has written about $140 million (€126 million) of premiums through its new Irish operation since it opened earlier this year to serve customers in the European Economic Area as it prepares for Brexit, according to the unit’s chairman.

Standard Club Ireland chairman Barnabas Hurst-Bannister said this week that the mutual insurer would remain committed to its new operation in the Republic, even if the UK’s ultimate exit from the EU takes the form of a soft Brexit.

“It’s quite difficult for us Brits to give any form of sensible view as to what might happen. No one’s got a clue,” said Mr Hurst-Bannister, adding that firms that have had to move business from London to prepare for the fallout have learned the lesson of how important “jurisdiction diversification” is.

Standard Club Ireland employs six people in Ireland, including head of risk Andrew Coffey, who was previously a senior insurance official at the Central Bank.

The head of the Dublin business, Robert Drummond, said the authorisation in recent months of the business’s insurance manager – London-listed professional services firm Charles Taylor – in Ireland “may be a platform” for that business to expand into other areas.

The amount of business written through Ireland this year equates to 45 per cent of Standard Club’s global premiums.

The mutual insurer first revealed in late 2017 that it intended to set up an EU hub in Dublin. It was authorised by the Central Bank of Ireland in January. Rival North P&I has also set up a subsidiary in Ireland this year, which currently employs seven people, according to a company spokeswoman.

Europe accounts for half of the 200 million gross tonnes of ships currently covered by North P&I, she said, declining to disclose insurance premium figures.

Protection and indemnity mutual insurance is provided by ship owners and operators that club together to cover each other against risks that traditional insurers refuse to underwrite. Typical protection and indemnity cover includes risks of damaged being caused by war, piracy, and environmental damage such as oil spills.

Standard Club’s oldest Irish policyholder-stakeholder is Irish Lights, the agency charged with maintaining a network of lights, buoys and other shipping aids along the State’s coastline.