Plastic in pocket: North to get new polymer banknotes

Cleaner, more secure £5 and £10 notes to be issued by Bank of Ireland UK from February 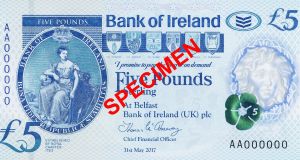 Bank of Ireland UK is to introduce its first polymer banknotes in the North from next February, with the £5 and £10 notes the first to go into circulation.

According to Ian Sheppard, managing director NI, Bank of Ireland UK, the new polymer notes will be “the single biggest change to Bank of Ireland banknotes in Northern Ireland in living memory”.

Mr Sheppard said the bank has a “rich heritage” of issuing bank notes dating back more than 200 years, but the new polymer notes will represent a first for the bank in a number of different ways.

“For the first time in our note history, the £10 note will have two arrangements of four raised dots in square formation, enabling physical identification for the visually impaired.

“The new notes will incorporate a clear window which can be seen from both the front and back of the notes, and they will have a shiny, iridescent area of ink which changes colour as you tilt the note,” Mr Sheppard added.

He believes the new notes, which will continue to feature the Old Bushmills Distillery in Co Antrim, will be cleaner, more durable and more secure.

Bank of Ireland, which is currently the largest issuer of banknotes in Northern Ireland, also intends to introduce a £20 banknote in 2020.

Meanwhile, Danske Bank has confirmed that it will also launch a polymer £10 note in the North next February.

Before it was acquired by Danske, Northern Bank made history in December 1999 when it became the first bank in the UK to issue a plastic note to celebrate the new millennium.