Barclays seeking to move €250bn business to Republic ahead of Brexit 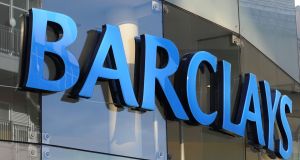 Barclays Bank has applied to the UK high court for an order allowing it to transfer its €250 billion European Economic Area (EEA) business to the Republic and expects this to be heard on January 22nd. Photograph: Joe Giddens/PA Wire

British bank Barclays will ask the UK’s high court in the coming months to allow it transfer business worth about €250 billion to the Republic as the lender steps up its Brexit preparations.

Barclays has already confirmed that it intends to move its non-UK European business to the Republic from Britain ahead of the country’s planned departure from the EU in March 2019.

The bank has applied to the UK high court for an order allowing it to transfer its European Economic Area (EEA) business to the Republic and expects this to be heard on January 22nd.

The hearing will cover corporate banking, investment banking, private clients and customers’ overseas business based in the EEA. Anyone who believes the plan will damage their interests can make their case at the January hearing.

According to reports last week, the move will involve the transfer of €250 billion in group assets to the Republic. The EEA comprises the EU, Iceland, Liechtenstein and Norway.

Barclays Bank plc and its capital securities arm are responsible for the businesses involved. Documents outlining how the transfer will work state that those activities will move to Barclays Bank Ireland plc in the early months of next year.

From a client’s point of view, the main impact of the move will be that their contracts will be with Barclays Bank Ireland rather than the lender’s London-based divisions.

Barclays Bank Ireland will become the main entity through which the financial institution will deal with clients in the EEA or with customers who want access to those markets.

Some existing liabilities of Barclays Bank plc and Barclays Capital Securities will also transfer to the Irish subsidiary.

However, the plc and Barclays Capital Securities will remain responsible for any litigation in which they are now involved, and will take charge of any court action relating to the period before the transfer to the Republic.

Last week Barclays chief executive Jes Staley confirmed that the Central Bank had given the British lender the green light for its expansion here.

“We therefore expect Barclays Bank Ireland in its new incarnation to be fully operational before the UK exit in March,” Mr Staley told industry analysts during a discussion of the institution’s third-quarter results.

The bank is due to move into new offices at One Molesworth Street in Dublin city centre early next month. It had previously pledged to boost its workforce here by 200.