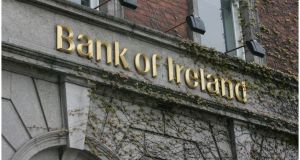 Bank of Ireland: expected to issue some senior debt in the second half of 2017 through its new holding company. Photograph: Bryan O’Brien

Bank of Ireland and AIB outlined on Friday of how they intend to comply with incoming European rules that allow for bondholders to face losses in the event of another crisis, without impacting depositors.

Both banks confirmed analysts’ expectations by saying they will set up holding companies at the top of their corporate structures. These would issue senior and junior debt in future, whereas deposits would be held in operating companies below the holding company, giving them more protection.

The decision to set up holding companies followed consultation with the euro zone’s Single Resolution Board, responsible for overhauling and even winding down ailing banks, if necessary, as well as the Bank of England.

Analysts at Davy expect the banks to set up these holding companies in the second half of this year, subject to necessary shareholder approval. These companies will have to issue debt that can be “bailed in” as the new rules are phased in between now and the end of the decade.

In their statements, neither bank gave information on how much “bail-inable” junior and senior debt the holding companies will need to meet the so-called minimum requirement for own funds and eligibilities.

Irish banks imposed about €15 billion of losses on junior bondholders during the crisis as they shared the cost of soaring loan defaults with taxpayers. But they were unable to “burn” senior bondholders because of opposition from the European Central Bank and the fact that there was no framework in place to do so without also hitting depositors.

“Essentially, taxpayers money will be used as a last resort to bail out troubled banks,” said Ryan McGrath, an analyst with Cantor Fitzgerald in Dublin. He expects that Bank of Ireland will issue some senior debt in the second half of 2017 through its holding company.

Sources familiar with AIB’s situation have said that setting up a holding company will be less of an immediate priority if the Government proceeds with a sale of its 25 per cent stake in the group in the first half of this year.

If the Government decides to hold off on an initial public offering, complex planning around setting up a holding company may be accelerated.