CSO to banish ‘leprechaun’ figures with wave of wand 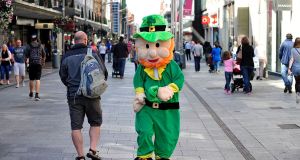 The relocation of intellectual assets was probably the main reason for the revised 26 per cent growth in Irish gross domestic product for 2015, which won us the tag “leprechaun economics”. Photograph: Aidan Crawley/Bloomberg

The extreme oddities of the Irish economy have prompted the birth of new indicator. Say hello to gross national income* (GNI*), articulated as GNI star.

Without getting too technical, the new measure, launched yesterday by the Central Statistics Office (CSO), strips out the distorting effects of profits retained by so-called “redomiciled plcs”, which are located here for tax purposes and whose contribution to the host economy is grossly inflated by traditional economic indicators.

The new measure will also attempt to account more accurately for the relocation of intellectual assets, which was probably the main reason for the revised 26 per cent growth in gross domestic product (GDP) for 2015, which won us the tag “leprechaun economics”.

Ireland and its statistical agency became a laughing stock internationally for producing what was an unavoidable measure of GDP growth.

The fact that our headline growth rate was bereft of all meaning was a product of globalisation, a phase of 21st-century capitalism that has seen companies grow to the size of small countries economically.

Apple, for example, has about €200 billion in foreign earnings stuffed in its sock drawer, sitting offshore and hidden from the US taxman. This equates to the entire GDP of the Czech Republic and would be enough to pay off Ireland’s national debt in one go.

When companies of this size shuffle their assets around, the effect on the national accounts of small countries can be like a tsunami as Ireland has shown.

The State’s low-tax economy just happens to be at the forefront of this phenomenon.

It’s questionable how much focus the CSO’s new measure will receive other than to be a caveat to the headline gross domestic product number.

For years, we were prevailed upon to see GNP, which strips out multinational profit flows, as the optimal measure of Ireland’s economy, that was until it started warping under the influence of intangible IP assets.

Nonetheless, the CSO can only produce more accurate measures of economic activity so as to allow policymakers make more informed decisions. The jump in GDP for 2015 flatters our debt metrics but the Government has accepted this by adopting tougher debt-reducing targets.