Monex directors share €6.3m dividend as profits and revenues up 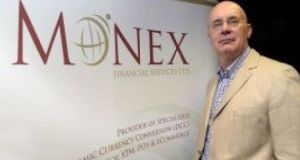 The company, whose clients include Ryanair, Hertz, Hilton Hotels and Bank of China, processes more than 271 million card transactions across 50 countries each year with processed transactions worth over €40 billion.

Monex was founded in Killarney in 1997 by former Fexco senior executive Frank Murphy. It employs more than 120 people globally.

Mr Murphy still holds 85 per cent of the ordinary share capital, with chief operating officer Michael Crowley owning the remainder of the stock.