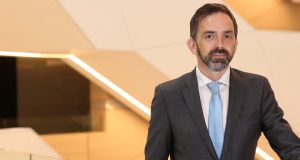 Ireland is still facing the possibility of a hard Brexit and a significant disruption to trade, even though the risk of a no-deal outcome has been averted “for now”, Central Bank deputy governor Ed Sibley has warned.

Speaking at an event in Dublin City University, Mr Sibley said the ultimate outcome of the Brexit process was still far from certain. “While we may be reaching the end of the beginning, a hard Brexit is still sufficiently plausible to require planning,” he said.

Mr Sibley also noted that the UK’s proposed departure agreement allows increased divergence between UK and EU rules and will result in increasing complexity in cross-border trade across a range of sectors.

“In other words, even if ratified, the current proposed deal will have economic impacts and affect the provision of financial services across the EU,” he said.

While recognising that a significant amount of work had already been done by authorities here to insulate the economy from a potential shock, Mr Sibley said more work was required to continue to reduce the risks of Brexit.

“As the UK leaves, it is increasingly important that Ireland continues to invest in and enhance its approach to influencing the future direction of EU policy,” he said.

Mr Sibley was speaking as an economic think tank estimated that prime minister Boris Johnson’s Brexit agreement would deliver a £70 billion (€81 billion) blow to the UK. Compared with staying in the EU, the UK economy would be 3.5 per cent lower in 10 years’ time under the prime minister’s newly-brokered agreement, according to the National Institute of Economic and Social Research (NIESR) study. UK opposition parties seized on the independent research as showing the damage Mr Johnson will do to the country, as they prepare for an expected December 12th election.

The researchers worked on the basis that the UK will leave the bloc with a free trade agreement (FTA) with the EU after a transition lasting up to 2021 while negotiating new deals with other nations.

“We estimate that, as a result of higher barriers to goods and services, trade and restrictions to migration, the economy would be 3.5 per cent smaller under Mr Johnson’s deal [FTA scenario] compared to continued membership in the EU customs union and single market,” the authors wrote.

The Treasury defended the PM’s proposals and said a “more ambitious” trade deal would be brokered with the EU than under the NIESR findings.