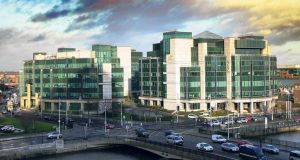 The IFSC in Dublin. Marshall Wace has become the latest investment group to activate its Brexit contingency plan after receiving licences to run management companies in the Republic.

Marshall Wace, one of the UK’s biggest hedge funds and chaired by Brexit-supporting Paul Marshall, has bulked up its Dublin operation as a protective measure against the UK leaving the European Union.

The $35 billion (€31 billion) manager has become the latest investment group to put its Brexit contingency plan into action after receiving licences to run management companies in the Republic.

She said they expected to lose valuable “passporting rights”, which allow them to do business in other European countries.

“Even if it is not a hard Brexit, they are probably looking a bit further down the line,” she said. “It will be a challenge to replicate passporting rights.”

The Central Bank granted Marshall Wace licences to run Ucits and AIFM management companies. This will allow the hedge fund to sell retail and alternative investment products across the EU once the UK leaves next year.

The company previously ran a smaller operation in Ireland but the additional licences ensure it will be able to distribute products across the continent in the event of a hard Brexit.

Marshall Wace would not comment on what the beefed-up operations would entail, but the Central Bank typically requires companies with such licences to have a degree of “substance”, or a certain number of people, in place.

The company would not confirm how many people this would involve, whether these individuals would be transferred from its London, Hong Kong or New York offices or whether they would be new hires. The company employs 240 staff across its offices, according to its website. The last filed accounts for its Irish operation show it has no full-time employees in Dublin. The accounts state the ultimate parent entity is MW Group LP, a limited partnership registered and domiciled in the Cayman Islands.

Mr Marshall is a strong supporter of Brexit and donated £100,000 (€114,000) to the Leave campaign. However, Ian Wace, co-founder and chief executive, backed Remain.

US private-equity firm KKR increased its stake in Marshall Wace to just under 35 per cent last month, having bought a 25 per cent holding three years ago.

Marshall Wace is not the only investment group with a prominent Brexit supporter at the helm that has taken measures to protect its foreign business.

AP1, the $37 billion Swedish national pension plan, seeded one Somerset fund with $50 million and requested it be set up in Ireland. The pension plan would not be drawn on whether this decision was related to Brexit when the Financial Times reported the move in July.

Mr Rees-Mogg was a prominent figure in the campaign for the UK to leave the EU. Somerset previously said he spent an hour in its offices three times a week.

Two of the five biggest donors to the Brexit campaign are investment industry executives with business interests in Ireland.

Crispin Odey, the hedge fund manager, gave more than £870,000. Several of his 14 funds are domiciled in Ireland.

Jeremy Hosking, co-founder of hedge fund Marathon and shareholder in Crystal Palace FC, donated just under £1.7 million to the Leave campaign. His current investment business, Hosking & Co, is based in Dublin. – Copyright The Financial Times Limited 2018

1 Why gift a son now if it eats into his tax-free inheritance threshold?
2 Chris Johns: Economic self-harm is the root of populism
3 Flights abroad ban could last all summer
4 Government to avoid ‘cliff-edge’ on Covid-19 payment changes
5 UK expected to phase Huawei out of 5G network
6 How to further divide the economy using the wage subsidy
7 You now get almost nothing for your money . . . but it could be worse
8 How much do Irish people earn? And what will Covid-19 do to our wages?
9 Why are markets booming when a crash is on the way?
10 Stocktake: Playing poker with the day traders
Real news has value SUBSCRIBE