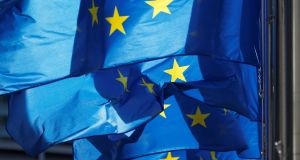 The shortfall for the euro zone’s 35 biggest and most complex banking groups stood at €125 billion last year. Photograph: Francois Lenoir/Reuters

European political leaders need another financial crisis to frighten them into completing a banking union, a senior EU official said on Monday. He said key issues such as a euro zone deposit insurance scheme and finalising a multibillion-euro backstop to resolve failing lenders remain outstanding.

Politicians need “a big enough crisis for them to be scared enough, but not big enough to kill us”, to finish the banking union project, he added.

Banking union, initiated in the wake of the financial crisis, was envisaged around three pillars: centralised financial supervision under the European Central Bank, which took effect in late 2014; the Single Resolution Mechanism, where the SRB became responsible in January 2016 for ordering the restructuring or winding up of failing banks; and a still-unestablished deposit insurance scheme, which is opposed mainly by Germany.

Polish MEP Danuta Huebner, a member of the parliament’s committee on economic and monetary affairs, told delegates at the conference that she does not see a deposit insurance scheme being resolved ahead of European elections in May next year.

Separately, euro zone states are discussing setting up a backstop for the current limited industry-funded Single Resolution Fund (SRF) for ailing banks, which will hold €25 billion this year, rising to about €55 billion in 2024.

EU leaders agreed in principle that, if the SRF were overwhelmed by the necessary rescue of a too-big-to-fail bank, the European Stability Mechanism, the rescue vehicle for member states in trouble, would be able to step in as a lender of last resort.

Valdis Dombrovskis, vice-president of the European Commission, said that a deadline to finalise negotiations on the backstop by the end of the year is “ambitious, but it’s important it is respected”.

The shortfall for the euro zone’s 35 biggest and most complex banking groups stood at €125 billion last year, according to the SRB.

Mr Enria said the “window of opportunity” for banks to raise such loss-absorption capital “is closing down” as international funding markets have turned more volatile recently.

Mr Enria also said it was important for investors in such bonds to have a clear understanding of where they stand in the capital structure of a bank, in the event of a failure where creditors are forced to take losses. The EBA chairman is currently up against Irish Central Bank deputy governor Sharon Donnery in a three-candidate race to find the next head of the ECB’s banking supervision arm.