Former auditors of Irish Nationwide could feature in legal action 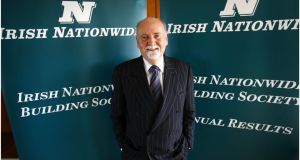 Accountancy firm KPMG – former auditors of Irish Nationwide Building Society – could be joined as a co-defendant in a legal action brought over €6 billion losses at the society.

A High Court judge has said he wants to be told by the end of October whether it is proposed to join accountancy firm KPMG – former auditors of Irish Nationwide Building Society – as a co-defendant in a legal action brought over €6 billion losses at the society.

Mr Justice Peter Kelly said a decision is awaited from either IBRC or others concerning the possible joinder of KPMG as a defendant. It seemed a law firm, Eugene F Collins, had been appointed to review legal advice on this issue and that was awaited.

However, he did not believe Mr Cooney was prejudiced to the extent he should be granted a stay on the proceedings as very little would be happening in the case before October and any costs incurred by Mr Cooney could be met by a costs order in his favour. The judge said the court is trying to manage this litigation, does not know what the position is on the joinder issue and could not be left indefinitely with a question mark over the matter.

Earlier, the judge noted, while the law provides a former auditor of a company cannot also be appointed a liquidator to it, the Act providing for the special liquidation of Irish Bank Resolution Corporation allowed for the position whereby IBRC special liquidator, a former partner in KPMG, is involved in the proceedings by IBRC/INBS against the former INBS directors as a plaintiff.