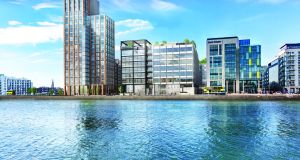 JP Morgan is to acquire a 130,000sq ft building in the heart of Dublin’s docklands in a move that will provide the US investment bank with the capacity to double its Irish work force to 1,000.

JP Morgan is to acquire a 130,000sq ft building in the heart of Dublin’s docklands in a move that will provide the US investment bank with the capacity to double its Irish work force to 1,000.

On Monday morning, US real estate group Kennedy Wilson confirmed that, in a joint venture with Fairfax Financial and the National Asset Management Agency (Nama), the US bank would become the first major occupier of the Capital Dock development through a forward-funding sale agreement. It is understood that JP Morgan will pay about €125 million for the building, or about €961 per square foot.

“We are excited to welcome JP Morgan, through its acquisition of 200 Capital Dock, as the first major office occupier to commit to this best-in-class mixed-use campus development, to grow its existing business and meet its long-term plans in Ireland,” said William McMorrow, chairman and chief executive of Kennedy Wilson.

Located on Sir John Rogerson’s Quay, and extending over 4.8 acres, Capital Dock is one of the largest single phase ground up developments to be delivered in Dublin with more than 660,000sq ft of new mixed-use space. JP Morgan will acquire 200 Capital Dock, a building of about 130,000sq ft fronting on to the River Liffey, with an expected completion date of the third quarter of 2018. JP Morgan already employs 500 people in Dublin, but the building is capable of accommodating more than 1,000 staff, indicating that the bank could double its Irish work force as it looks to relocate business following the departure of the UK from the European Union.

“Dublin has the vibrant business and technology communities that suit a global firm like ours,” said Carin Bryans, senior country officer for JP Morgan in Ireland. “Given the momentum of our local businesses, this new building gives us room to grow and some flexibility within the European Union.”

Martin Shanahan, chief executive of IDA Ireland, said that the agency has been “constantly engaged” with JP Morgan over the past number of months, adding that the new office would “afford it both the space and flexibility to meet its future growth plans”.

“We are delighted that the company has selected Dublin to grow some of its businesses and confirmed in recent weeks that our capital city will be one of the anchors for their post-Brexit European operations,” he said.

At the weekend, the bank’s head of investor services, James Kenny, told the Financial Times that it is to hire a “significant” number of people in Dublin for its custody and fund services businesses.

The bank has previously said that it is looking at its options after Brexit, though it says that the Dublin plans are related more to the growth of its custody and fund service business. “Growth plans are driving our real estate plan,” Mr Kenny told the Financial Times, in an interview in Hong Kong this weekend.

Mr Kenny said JP Morgan’s impression is that some jobs can be “filled by people moving from other countries” because Ireland has a “very flexible immigration policy”.

JP Morgan indicated earlier this month that it would shift jobs to Dublin, Frankfurt and Luxembourg as it prepares for the UK’s exit from the European Union.

Sources told the Irish Times at the time that the group’s plans for Ireland, where it can trace its operations back to 1926, are focused on expanding existing back-office functions in Dublin, rather than adding front-office roles.

JP Morgan Bank (Ireland) is mainly involved in providing administration and accounting services to hedge funds and mutual funds as well as treasury and cash management services to clients globally.

JP Morgan’s chief executive, Jamie Dimon, said before the Brexit referendum last June that the bank could move up to 4,000 of its 16,000 UK work force in the event of voters opting to quit the EU. In January, he said the final number of job relocations could be higher.