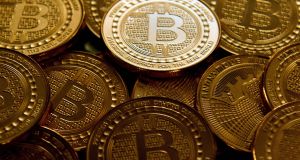 Irish investors are turning to crypto currencies such as Bitcoin in growing numbers to try and benefit from outsize gains. Photograph: Karen BLEIER/AFP/Getty Images

Irish banks are monitoring investment in cryptocurrencies, although the majority of providers have not yet banned the purchase of bitcoin, litecoin and up to 1,600 other cryptocurrencies by Irish investors with their credit cards.

A spokesman for AIB said it is “monitoring the development” of the growth in cryptocurrencies, but added that customers are still able to use their cards to purchase them, while Bank of Ireland says it does not “currently” restrict the purchase of such currencies. However, it added that it constantly reviews card usage, and “would take action where we see an unacceptably high risk to our customers”.

However, investors should be aware that some banks may also treat such transactions as a “cash” credit card transaction; this means that they would go through a more rigorous risk process than a straight forward credit card purchase, and you will be faced with higher “cash” charges.

The heightened interest in cryptocurrencies comes as UK banks crack down on investors buying such currencies with their credit cards. Earlier this month a host of UK banks, including Lloyds Bank, Bank of Scotland, and Virgin Money, banned customers from purchasing crypto with their credit cards, fearful of investors running up sizeable debts on their cards which they can’t repay as the value of the currency slides. Since last December, it has fallen from a high of almost $20,000 to less than $6,000 in early February. It has since climbed back to about $8,000.

But it’s not just banks who are wary of people buying with credit cards, or even Paypal; so too are the crypto platforms, who fear banks will “charge back” sums spent on credit cards. Bisq for example, which sells a range of currencies including bitcoin, byte, dashcoin, and mycelium, says it only “supports payment methods in which chargeback is not easy”, so it rules out both Paypal and credit cards.