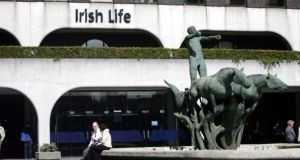 Irish Life said it paid out almost €610 million last year on policies in relation to illness and death.

Irish Life contributed profits of €201 million for its parent Great-West Lifeco in 2017, up 18 per cent from the €170 million recorded a year earlier.

The company, which is one of the largest financial services companies in the Republic with more than 1.3 million customers, was acquired from the State by Canada Life owner Great-West Lifeco for €1.3 billion in 2013.

New figures show Irish Life’s net earnings for the fourth quarter were €63 million, as against €61 million for the same period in 2016.

The amount of assets under management also rose in the final three months of the year, increasing to €82.7 billion from €78 billion.

During the quarter, in the largest transaction of its kind in Ireland, Irish Life arranged a €335 million “bulk-annuity” insurance policy, more popularly known as a buy-in, on behalf of Danske Bank’s Irish defined-benefit pension scheme.

The company said it paid out almost €610 million to customers affected by illness and death last year.

Great-West Lifeco reported a 13 per cent rise in sales and a 5 per cent jump in adjusted net earnings in the fourth quarter.

1 ‘My rent here is so low it’s a joke’
2 This charming man: how Paschal Donohoe won the Eurogroup presidency
3 ‘Sad day’ for House of Ireland as tourism retailer goes out of business
4 Goodbody’s planned €155m sale to Bank of China falls through
5 Business ‘will not survive’ on essential-only travel - task force
6 Irish tech firm to facilitate cashless tickets for hurling and football
7 Remote workers double as users prepared to pay more for broadband
8 Pharmaceutical industry signals it won’t extend drugs agreement
9 Caveat: The tourism sector deserves to be taken more seriously in this crisis
10 Government won’t name date for EV grants for car dealers
Real news has value SUBSCRIBE