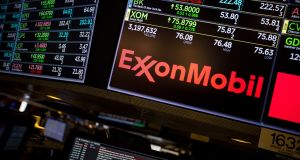 The SPDR S&P 500 exchange-traded fund (ticker SPY) suffered a record $23.6 billion in outflows last week amid the worst momentum swing in history for the underlying US equity benchmark.

Outflows amounted to 8 per cent of the fund’s total assets at the start of the week, a rate of withdrawals not seen since August 2010. A blowup in volatility-linked products sent markets haywire, eliciting waves of risk aversion from jittery investors.

Strategists at JPMorgan said the swiftness and severity of the positioning unwind is a sign that further selling from the likes of commodity trading advisors and risk parity funds “should be limited from here.”

“The picture we are getting in the U. equity ETF space is one of advanced rather than early state de-risking,” they added.

The five-session stampede for the exits erased the previous nine weeks of inflows into the fund, which is issued by State Street. The combination of price declines and withdrawals erased $38.6 billion in SPY’s assets. That’s nearly double the second-worst showing of $19.4 billion in asset shrinkage during the week ending Aug. 21, 2015, when China’s surprise devaluation of the yuan roiled markets. Prior to this recent market tumult, extreme enthusiasm for US equities had propelled the fund’s total assets above $300 billion.