Irish banker was tapped to head Deutsche Bank board 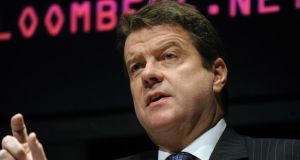 Colm Kelleher: does not speak German and spent his career at a Wall Street institution hugely different to Deutsche Bank. Photograph: Peter Foley/Bloomberg

Cerberus, the US private equity fund that is Deutsche’s fifth-biggest shareholder, floated Mr Kelleher in conversations with regulators and chief executive Christian Sewing, said people familiar with the matter.

Cerberus has been agitating for Mr Achleitner’s departure for more than a year and began courting Mr Kelleher before the German bank’s annual investor meeting in May.

Mr Kelleher, who stepped down as Morgan Stanley’s number two in March 2019, declined to comment, as did Cerberus and Deutsche Bank.

Cerberus disclosed a 3 per cent stake in November 2017, which has since lost €400 million of value.

Mr Achleitner last May said he would step down when his second five-year term ends in 2022. That announcement, coupled with Deutsche’s improved financial performance in 2020, took some urgency out of replacing the Austrian who has led the bank through three leadership teams and five strategic plans.

The plan to install Mr Kelleher was not widely known within Deutsche, but some of the bank’s most senior executives had heard about it. One of them described it as a “very surprising” proposition, because Mr Kelleher does not speak German and spent his career at a Wall Street institution that was hugely different to the bank.

Germany has a two-tier corporate governance structure, with a chairman leading a supervisory board where half the seats are held by workers representatives. Non-executive directors can be proposed by shareholders at the annual meeting and are approved by majority vote. It is not clear whether Cerberus’s idea had the support of other investors. – Copyright The Financial Times Limited 2020