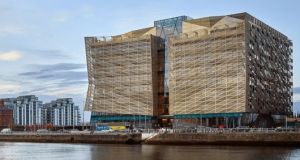 Central Bank has offered to redeploy spare capacity at its currency centre for contact tracing.

The Central Bank has offered to lend a hand with the State’s Covid-19 contact tracing effort.

According to the minutes of a recent meeting, the regulator has been engaging with the Health Service Executive (HSE) about redeploying staff at its currency centre in Sandyford in Dublin.

“Arising from some capacity in the currency centre, the bank was engaged with the HSE on the possibility of it assisting with contact tracing,” Gerry Quinn, the Central Bank’s chief operations officer, told the October meeting of senior staff.

The HSE has been seeking to have Civil Service staff reassigned to assist with contact tracing amid reports that the current system is understaffed and overwhelmed by high case numbers.

At one point last month, the HSE was forced to ask up to 2,500 people who tested positive to ring close contacts themselves.

The Central Bank’s head of financial control Annemarie Britz also presented the meeting with a draft budget for 2021, which came to €347 million, €2 million less than 2020.

“In a departure from previous years’ bottom-up approach, and in order both to complete the process in a more timely fashion and to focus on budget reductions for 2021, a number of cost categories were set centrally by the governor’s committee,” the minutes said.

They also noted that next year’s budget was framed against an uncertain backdrop due to Covid and contained a €5 million contingency.

The bank’s investment budget will also be cut by €5 million to €98 million next year.

The meeting was also updated on the Central Bank’s Spencer Dock property strategy, which will see it bring Block R of the premium development to the market.

The regulator has placed the block, which is located directly behind the Convention Centre, on the market with a guide price of €110 million.

The proceeds of the sale will be used to partially offset the €205 million the bank spent last year on the acquisition of nearby blocks 4 and 5 at Ballymore and Oxley’s Dublin Landings scheme.

Located immediately adjacent to the Central Bank’s North Wall Quay headquarters, those two buildings will accommodate the expansion of the bank’s existing 1,815-strong workforce by up to 300 employees.