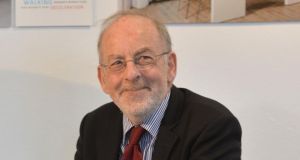 The governor of the Central Bank of Ireland, Patrick Honohan, has written to the Oireachtas banking inquiry to “rephrase” some comments he made in relation to the options that were open to the government on the night of the bank guarantee in September 2008.

Mr Honohan appeared before the committee on January 15th and was asked if his view of Anglo Irish Bank’s inclusion in the guarantee had changed since he produced a special report for the government in 2010, before he became governor of the Central Bank.

In a letter to inquiry chairman Ciarán Lynch, sent on February 12th, Mr Honohan said he had reflected on his discussions with the committee and while he does not think there has been “much evolution” in his thinking on the matter, he accepts that a “different impression might have been conveyed” to the inquiry.

“The discussion at my session with the inquiry moved between these two scenarios in a manner that may not have been altogether clear. So let me rephrase my views,” he said.

The governor outlines two scenarios – one uses the benefit of hindsight to outline what the government should have done in September 2008, and the other relates to the actual outcome.

In relation to the hindsight scenario, Mr Honohan supposes that consultants had advised the government that a blanket guarantee of Anglo and Irish Nationwide would cost €35 billion in the long run. He said that this would have been too expensive relative to the reputation and confidence damage that would have been caused to Ireland by a liquidation involving a bail-in of creditors.

“Therefore . . . the government would have done better by not including those two banks in a guarantee,” he stated.

He adds that the government should have told the ECB and the European Commission that it intended to liquidate the banks, protecting only insured depositors.

This would have shocked EU officials and could have resulted in a risk-sharing arrangement to avoid destabilising confidence beyond Ireland.

What actually happened was that the consultants advised that the market had no confidence in either Anglo or Irish Nationwide.

Mr Honohan said that the government’s best available response would have been to replace the managements at the two banks, likely through nationalisation, and that emergency liquidity assistance should have been provided for a short period to allow for consultation with the EU, including on the option of risk sharing.

Mr Honohan closed by stating: “I have not attempted to correct inaccuracies or clarify ambiguities in the official record of what was certainly a very complex and fast-moving conversation.”