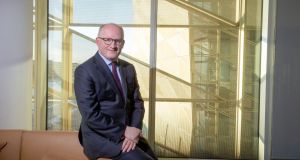 Philip Lane: Last year, he was nominated as a vice-president of the ECB but his nomination was withdrawn to “avoid divisions”. Photograph: Tom Honan

The governor of the Central Bank of Ireland, Philip Lane, has been nominated for appointment as the next chief economist of the European Central Bank, Paschal Donohoe told journalists in Brussels on Monday.

The appointment by finance ministers in the next month, if successful, would see Ireland taking its first seat on the board of the ECB. It is the only founder euro member state not to have been represented on the six-member executive board.

“I’m pleased to confirm that I will be nominating Philip Lane for the approaching vacancy in the European Central Bank, “ Mr Donohoe told journalists on his way in to a eurogroup meeting.

“Philip has done an exemplary job leading the Irish Central Bank during the current phase of economic stability in Ireland and he has demonstrated his credentials as a central banker of the first order,” the Minister said.

“He has also played a leading role in many European institutions where he has been involved in many important projects about the future of central banking dealing with different policy issues.

“He is also an eminently qualified economist and is very well-qualified to play a leading role in the development and oversight of monetary policy in the euro area.”

Mr Donohoe promised to canvass fellow ministers for the appointment. The eurogroup will agree on a candidate on February 11th while the Ecofin meeting of finance ministers will adopt a formal recommendation to the European Council on February 12th.

Last year, Mr Lane was nominated as a vice-president of the bank but his nomination was withdrawn before the election to “avoid divisions”. The Spanish finance minister Luis de Guindos won the position.

The ECB is also likely to see big changes this year with turnover in key positions, notably the retirement of its president Mario Draghi.

Mr Lane, a Harvard-trained former Trinity College professor, is reported to be highly regarded by finance ministers with some speculation that his election may be uncontested.

The name of Austrian deputy central bank head Andreas Ittner has also been mentioned although Irish sources were suggesting that they have received assurances from Vienna that his name would not go forward.