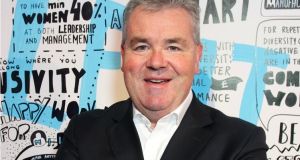 Under John Herlihy’s leadership Google acquired its EMEA campus on Barrow Street in Dublin, located a new data centre in Ireland and established The Foundry, Google’s first centre for digital excellence in Europe.

The Limerick native, who grew Google from 50 employees to more than 2,500 staff during his tenure, stepped down as head of its Irish operations and as company vice-president of sales and operations, at the end of April after spending a decade leading the company.

Under his leadership Google acquired its EMEA campus on Barrow Street in Dublin, located a new data centre in Ireland and established The Foundry, Google’s first centre for digital excellence in Europe.

Prior to joining Google he held several leadership positions at leading tech companies both in Europe and the US. These included First Data, Oracle, Adobe and KPMG. Mr Herlihy is an active non-executive director of a number of private and public companies, primarily in finance, biotech, software and agri-food sectors.

Mr Herlihy is taking over from Ariel Eckstein, who has been LinkedIn’s managing director in EMEA for the past four years. Mr Eckstein has moved into a different role with the company.

“I relish the opportunity to lead LinkedIn’s business in the region and I have always admired the company’s ethos’’, said Mr Herlihy.

“LinkedIn’s vision to create economic opportunity for every member of the workforce is a powerful one and resonates with those looking to start, foster and advance their careers. I am looking forward to working with our team to realise this vision and to further strengthen LinkedIn’s presence across EMEA, from both a member and business perspective,” he added.

LinkedIn this week raised its full-year profit and revenue forecasts on the back of positive results.

Expanded offerings helped boost revenue from the company’s talents solutions business, which connects recruiters and job seekers, by 46 per cent in the third quarter. The business accounted for nearly two-thirds of LinkedIn’s total revenue. Revenue from advertisements on its website rose 28 per cent, while paid membership income increased 21 per cent.

LinkedIn, which operates in over 200 countries and territories, said the total number of members rose 20 per cent to 396 million at the end of the third quarter. The company said the number of its subscribers in China had more than tripled since early 2014, when it launched a local language version, to over 13 million currently.

LinkedIn also said 55 per cent of its traffic was through mobile devices such as smartphones and tablets.