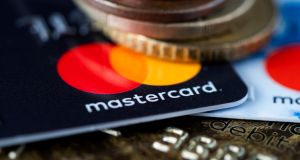 Mastercard: Revenue at the payment company increased by 15 per cent on an annual basis, to $4.5 billion (€4 billion), against analysts’ estimates of $4.4 billion

Purchase volume on the Mastercard’s network rose by 14 per cent in the third quarter, accelerating slightly from the second quarter, driving revenue and earnings per share past Wall Street’s expectations.

Revenue at the payment company increased by 15 per cent on an annual basis, to $4.5 billion (€4 billion), against analysts’ estimates of $4.4 billion. Adjusted earnings, at $2.15 a share, compared with projections of $2.01.

During the quarter, the company acquired the Danish real-time payments company Nets for $3.2 billion, as part of its strategy to expand beyond card payments and become a “multi-rail” payments company.

Nets technology facilitates real-times payment between bank accounts in Europe. The deal follows a series of other mergers in the payments space. Mastercard is also investing in its business-to-business payments tools.

Last week, Mastercard rival Visa reported its payment volumes rose 9 per cent in the fourth quarter. Credit-card issuing banks such as Citigroup, JPMorgan and Capital One have reported solid results from their card operations, too, as US consumers continue to spend and interest rates on loan balances remain near multi-decade highs, despite rates falling elsewhere in the economy.

Shares in Mastercard and Visa have returned 47 and 37 per cent, year to date, easily outpacing the wider market’s 23 per cent return. – Copyright The Financial Times Limited 2019

1 Basic income for all: Has the Covid crisis given us a new economic model?
2 Admission of mistake in Oxford vaccine dose raises doubts over reliability
3 Direct sea routes to Europe offer certainty in choppy Brexit waters
4 ‘I don’t need to do any of this. . .I don’t actually need to work.’
5 Promontoria barred from pursuing doctor over Ulster Bank loan
6 Only way is up for Stripe as valuation skyrockets
7 There was no vaccine for Anglo: Why the last crisis was different
8 Online shoppers face unwelcome tax surprise
9 Kinzen raises $2.2m as it helps clients fight ‘misinformation’
10 RTÉ board should not tune out from digital expertise
Real news has value SUBSCRIBE