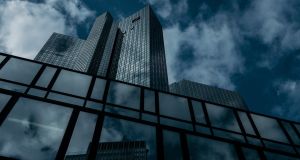 Deutsche Bank is preparing a deep overhaul of its trading operations including the creation of a so-called bad bank to hold tens of billions of euros of assets as chief executive Christian Sewing shifts Germany’s biggest lender away from investment banking.

The plan would see the bad bank house or sell assets valued by the German lender in its accounts at up to € 50 billion after adjusting for risk.

Deutsche’s equity and rates trading businesses outside continental Europe will be severely shrunk or closed entirely as part of the revamp, although the final decision is pending, according to four people briefed on the plan. Managers are also set to unveil a new focus on transaction banking and private wealth management.

The proposed bad bank, which is known internally as the non-core asset unit, will comprise mainly of long-dated derivatives, the people said.

Mr Sewing is likely to announce the changes with the bank’s half-year results in late-July.

The final scale of the non-core unit has not been decided and the number “continues to oscillate”, but executives are discussing at least €30 billion of risk-weighted assets with an eventual size of €40 billion to €50 billion most likely, two of the people said. At the upper end, it would account for 14 per cent of Deutsche’s balance sheet.

“The cuts need to be radical,” said one senior figure at the bank. “It makes sense for us to put all these long-term, nil-revenue assets in a non-core unit.”

The person added: “We now have the capital and liquidity freedom to do what needs to be done; we couldn’t have acted decisively much sooner because we needed to have built up those buffers.”

The lender said in a statement: “Deutsche Bank is working on measures to accelerate its transformation so as to improve its sustainable profitability. We will update all stakeholders if and when required.”

Deutsche’s investment bank has weighed on earnings in recent years, and made losses in the past two quarters. Along with a series of fines for misconduct scandals, the poor performance of its core business has driven down the bank’s share price to the lowest in its 149-year history. Sentiment darkened in April when a long-rumoured merger with Commerzbank collapsed.

The lender is targeting a return on tangible equity — a measure of profitability — of at least 4 per cent this year, below most rivals. But it generated only a 1.3 per cent return in the first quarter. None of the analysts that cover the group forecast it can achieve its goal without major structural changes.

“Mr Sewing needs to be decisive,” said one senior European policymaker. “The time for incremental change is over.”

Three people familiar with the plan said any perception that Paul Achleitner, the bank’s chairman who had been seen as a gradual reformer, would be a brake on Mr Sewing’s restructuring was outdated. “We all know it needs to be radical,” one said.

While the derivatives destined for the non-core unit still provide some cash flow, all the profit on the deals — and therefore the associated bonuses for those who arranged them — were booked up-front.

In the years since the instruments were first arranged, they have become a major drag on the bank’s capital because of their more stringent treatment under new regulations introduced after the financial crisis, said the people briefed on the plan.

Now that the bank is sitting on €260 billion of cash and similarly liquid securities, it no longer relies on these assets for cashflow and can attempt to run them down or sell them to other banks with lower funding costs and capital pressures, or to private equity investors eager to scoop them up at a discount, one of the people said.

The German bank believes it can divest the assets without taking large hits to its profit or capital because the long-dated interest rate derivatives are not toxic and have a predefined run-off plan, one of the people said.

The bank will retain its better-performing bond trading business — which is ranked in the global top-five by industry monitor Coalition — and its currency-trading operation, which reclaimed the second spot in the Euromoney FX survey last year.

Shareholders sitting on painful losses have been ramping up the pressure since the stock dipped below €6 for the first time this month, down 40 per cent in the past year.

JPMorgan estimated last year that Deutsche’s US operation was losing 25 cents for every dollar of business it does and its global equities business alone loses about € 600 million annually.

One reason the bank has waited so long to make the changes was a fear it would close down large parts of the equities and rates businesses at the bottom of the cycle, people briefed on the plan said.

People briefed on the plan said the new non-core unit comprises mainly non-strategic assets and would be different to its prior bad bank, which contained far more loss-making and toxic assets. From 2012 to 2016, Deutsche ran down a non-core unit with about €125 billion in risk-weighted assets — including a $4.3 billion Las Vegas casino it took over when the developer defaulted — resulting in a cumulative pre-tax loss of €14.6 billion over the period. When Deutsche dissolved the bad bank, the roughly €10 billion of assets left were reintegrated into the core businesses.

However, investment banking activity in Europe has remained anaemic and the European Central Bank has indicated interest rates are set to remain negative for much longer than expected, meaning that waiting was no longer an option for Deutsche. – Copyright The Financial Times Limited 2019.