Products were sold to clients who didn’t understand them, according to complaints 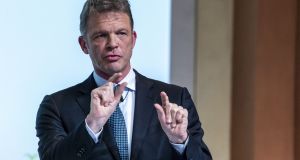 Deutsche Bank is conducting an internal investigation after receiving complaints that some bank employees sold risky investments to clients who didn’t properly understand them.

“We initiated an investigation in relation to our engagement with a limited number of clients,” a bank spokesman said in a statement on Sunday, following a Financial Times report on the investigation. Deutsche Bank won’t comment further until it completes the review, he said.

The inquiry, codenamed Project Teal, was started in response to client complaints last year and originally focused on a desk in Spain that sells hedges, swaps and derivatives, a person familiar with the matter said. It appears that only Spain- and Portugal-based client firms were affected, the person said.

Chief executive Christian Sewing has been trying to improve relations with regulators and draw a line under a string of previous missteps as he seeks to turn around Germany’s largest bank. Fitch Ratings on Monday raised its outlook on the lender, citing progress made under Mr Sewing’s new strategy.

Deutsche Bank paid billions of dollars in fines and settlements since the financial crisis for misconduct ranging from failure to stop money laundering to selling toxic mortgage securities and rigging benchmark interest rates.

While the bank resolved several cases with regulators, others are outstanding. Deutsche Bank has been co-operating with a US justice department investigation of Danske Bank A/S and Swedbank AB, both of which acknowledged compliance failures for serving as a conduit for tens of billions of dollars in suspicious transactions. Deutsche Bank, which handled the bulk of those transactions as a correspondent bank, paid New York banking regulators $150 million (€123.6 million) for lax oversight.

The bank is also aiding US investigations into whether it played a role in a suspected conspiracy to rig the price of Treasury securities, and an inquiry into the hiring of people related to prominent foreign authorities including China, according to its most recent annual filing.

Another legal threat is a lengthy criminal inquiry into how wealthy Russians moved $10 billion (€8.2 billion) into the US financial system using so-called mirror trades in Moscow and London, most of it facilitated by Deutsche Bank. The bank has settled that matter with US and UK regulators and acknowledged compliance lapses, leaving the Justice Department’s inquiry hanging.

The bank’s latest internal inquiry seeks to determine whether clients were incorrectly sorted according to their financial sophistication under the Markets in Financial Instruments Directive, and whether the bank’s staff sold investment banking products to clients in breach of the EU rules, the person said.

The inquiry has been expanded across Europe, and the bank is also looking at whether employees colluded with staff at some of the clients to split the profits, the FT reported.

The misconduct appears to be broad-based over several years, rather than an isolated occurrence, the FT said in its report. It is centred around a former employee who has already left the bank, according to the newspaper.