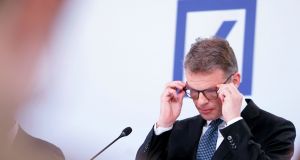 Deutsche Bank’s plan to save €100 million a year by simplifying its complex corporate structure in Germany has won the backing of regulators, boosting chief executive Christian Sewing’s efforts to overhaul Germany’s biggest lender.

Under the plan, Deutsche will eliminate a separate legal entity, known as Deutsche Bank Privat- und Firmenkundenbank AG (PFK), that houses its domestic retail operations. They will instead sit within the overall group.

The European Central Bank and BaFin, Germany’s financial regulator, recently “indicated they would support the planned merger”, according to a memo Deutsche Bank sent to staff on Monday. The move is aimed at “helping to end the duplication of structures and processes and at boosting efficiency”.

Deutsche said the simplification would make “a significant contribution” to cost cuts. The lender’s German retail operations are expected to lower annual costs by €1 billion over the coming three years, with the scrapping of PFK accounting for about 10 per cent of the total, according to people briefed on the matter.

PFK holds a separate banking licence, and has its own executive and supervisory boards alongside separate risk control functions. At the end of 2018, the division employed 34,000 staff and held a fifth of the bank’s total assets.

The private bank, which also includes the lender’s wealth management division, has become Deutsche’s single-largest segment with €8.2 billion in revenue last year, but rising costs left it unprofitable. Mr Sewing has vowed to lift the private bank’s return on tangible equity to 11 per cent by 2022.

The PFK structure dates back two decades to a period when Deutsche was keen to exit retail banking, either through listing its business on the stock market or merging it with a rival. While the bank never went through with this, it kept the legal entity it had created for the mooted spin-off.

The ECB and BaFin declined to comment. – Copyright The Financial Times Limited 2020