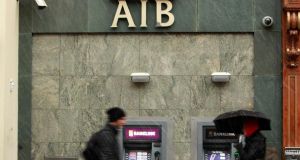 AIB Mortgage Bank and AIB claimed it advanced money to the couple that, the court found, were used for purposes including the €2.5 million purchase of a property located beside their former home. Photograph: Julien Behal/PA Wire

The High Court has dismissed an application by AIB for a €2.6 million summary judgment against a south Dublin couple.

AIB Mortgage Bank and AIB claimed it had advanced money to the couple, which, the court found, was used for purposes including the €2.5 million purchase of a property located beside their former home. It claimed the couple breached the terms of loan facilities offered in 2010 and, while some money had been repaid, some €2.6 million remained outstanding.

The couple disputed the bank’s claim for summary judgment and sought a plenary hearing.

Mr O’Brien, represented by Venetia Taylor BL, argued that the money at the centre of the dispute was advanced in 2006 and in 2008 but funds were not drawn down from the bank in 2010.

On that basis, the loan agreements are void due to a want of consideration, he claimed.

Mr O’Brien, who is a solicitor, also argued AIB failed to honour an oral agreement to advance him additional funds so he could build an extension to a property he moved into and that delayed his ability to sell his former home.

That delay, he claimed, meant he was forced to sell at the very bottom of the property market.

He also claims the bank failed to comply with the code of conduct of mortgage arrears.

The property was acquired because, unlike their former home, it was suitable for an extension. The couple moved into the new home in late 2007 and, as agreed with the bank, their former home was put up for sale.

Mr O’Brien said, during that period, the former home was rented and that money was paid to the bank to reduce his arrears.

He also claims he wanted to sell the house for €1 million in 2008 but the bank refused to allow him to accept that bid because it was a “vulture price”.

Ms O’Brien’s lawyers sought to have the case remitted on grounds including that she was subjected to undue influence in relation to the loan negotiations.

AIB disputed the couple had raised an arguable defence to its claim for summary judgment. It said, as part of an internal bank exercise, the loans advanced to the couple were categorised as being subject to agreements in 2010.

In his decision Mr Justice Binchy said money was advanced to the couple in 2006 and the exercise that the parties engaged in in 2010 was a very common practice in the years following the financial crisis.

While the bank said its provision of the 2010 facilities amounted to no more than an internal exercise, and can point to credits and debits on paper, the fact was no new funds were advanced or drawn down by the couple in 2010, he said.

There was some substance to the defence that there was an absence of consideration in connection with the 2010 facilities, he found.

On that basis, it was appropriate the case go forward for plenary hearing, he ruled.