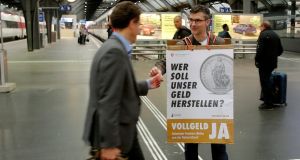 A member of the sovereign money initiative, a referendum campaign that would abolish traditional bank lending and allow only money created by the Swiss National Bank (SNB), campaigns for a Yes vote. Photograph: Arnd Wiegmann/Retuters

In a referendum on Sunday, just 26 per cent supported plans to strip banks of their ability to “create” money when giving loans to consumers and businesses, according to projections based on early results.

The results will come as a relief to Switzerland’s finance sector and to the Swiss National Bank, the central bank. Thomas Jordan, SNB chairman, warned ahead of Sunday’s vote that the Vollgeld, or “sovereign money”, initiative would be “an unnecessary and dangerous experiment, which would inflict great damage on our economy”.

Opinion polls had shown stronger support for the initiative. Under Switzerland’s system of direct democracy just 100,000 signatures are required to trigger a referendum.

The Vollgeld plan would have abolished “fractional reserve” banking — the basis of financial systems around the world, under which only a fraction of deposits held by banks on behalf of customers are backed by notes and coins or banks’ deposits at the central bank.

In addition, the SNB would have had the authority to allocate central bank money to the government — or even directly to the public.

Backers argued that this would have made Switzerland’s financial system safer by reducing indebtedness and preventing boom-and-bust credit cycles. They also argued money was a “public good,” which should be controlled by a state institution such as the SNB.

However they faced stiff opposition from Switzerland’s main political parties and bankers.

Sergio Ermotti, chief executive of UBS bank, said voters would have to be “suicidal” to vote for it. The SNB also dropped its usual political neutrality to campaign vigorously against the proposal.

Opponents of the Vollgeld idea argued that it would rip up a well-tested financial system that encouraged economic growth and had been significantly strengthened over the past decade.

Pressure for reform of fractional reserve banking has grown since the global financial crises of 2007-2008, with proponents of changes including Mervyn King, former governor of the Bank of England.

The Vollgeld proposals were similar to ideas that emerged in the US in the 1930s, in the wake of the Great Depression. In 1935, the economist Irving Fisher proposed a “100 per cent reserve banking” system to eliminate bank runs, smooth economic cycles and reduce indebtedness.

Switzerland’s frequent referendums mean the affluent Alpine economy has often served as a test of public support for radical ideas.

If the initial projections for Sunday’s result are confirmed Vollgeld supporters could take some comfort in winning a higher share of the vote than the 23 per cent won two years ago by campaigners for the introduction of unconditional “basic incomes”.

Vollgeld campaigners described Sunday’s vote as a starting point. “The first step towards reform of the financial system is to understand how it works,” said Emma Dawnay, campaign spokesman. She described the result as “very respectable” given the strength of the opposition.