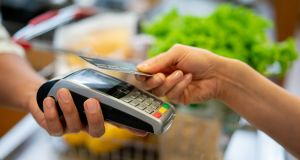 December was another record month for contactless payments with the monthly value of contactless spending surpassing €1 billion for the first time, according to the latest figures published by Banking and Payments Federation Ireland (BPFI).

The volume and value of contactless payments in the fourth quarter of last year, meanwhile, rose by 23.7 per cent and 63.4 per cent year on year to 174 million payments worth €2.8 billion.

While payments fell in November, due in part to the Covid-19 restrictions imposed in late October, activity rebounded in December when the monthly value of contactless payments exceeded €1 billion.

Daily volumes rose to 2.1 million, surpassing the previous peak of two million in September, while daily values jumped to €36.5 million.

The growth in the value of payments was driven by a sharp increase in the average payment value to €17.36, up from €15.93 in August. There were about 5.1 million contactless-enabled debit cards and almost 1.7 million credit cards in issue by the end of December.

BPFI chief executive Brian Hayes said there was clearly an increased demand for contactless payments, but that public-health measures introduced in recent weeks would have an impact.

“We have seen yet another record-breaking month for contactless payments in December as consumer behaviour coupled with Covid-19 continue to reshape payment methods,” he said.

“As well as seeing the monthly spending value top €1 billion for the first time, we have also seen increases in both the volume and value of contactless transactions on a daily basis.

“These figures clearly demonstrate the growing demand for contactless payments, allowing consumers to conduct fast, simple and secure transactions during the current pandemic.

“However, in light of the Level 5 restrictions introduced during the Christmas period, we will undoubtedly see an impact on contactless transactions and consumer spending in general as we move forward into 2021.”