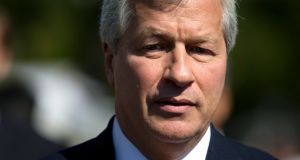 Jamie Dimon is the only leader left who steered a major US bank through the financial crisis. Photograph: Reuters

Mr Dimon felt chest pain before work Thursday and went to a hospital, checking himself in, according to a person with direct knowledge of the matter.

It may have saved his life: he was diagnosed with acute aortic dissection, a serious condition involving a tear in the large blood vessel branching off the heart.

“It was caught early and the surgery was successful,” the bank said in a statement. “He is awake, alert and recovering well.” It placed co-presidents Daniel Pinto and Gordon Smith in charge during his recuperation.

Mr Dimon (63) is the most prominent executive in global banking, serving as a spokesman for the industry and leading a juggernaut of both Wall Street and consumer lending.

At the helm for almost 15 years, he’s the only leader left who steered a major US bank through the financial crisis, and his firm just set a profit record for the nation’s lenders.

He also serves as chairman and has frequently joked for most of a decade that he plans to keep running the company for five more years.

“He has lasted far longer than the average CEO,” said Peter Hahn, who recently retired as dean of the London Institute of Banking and Finance. “It brings up the point that nobody is irreplaceable. It’s now critical that the board ensures it has a succession plan in place.”

JPMorgan’s shares fell 3.5 per cent in pre-market US trading.

The surgery comes at a particularly turbulent time for the biggest banks. JPMorgan said this week it was halting most business travel because of the spread of coronavirus, and it enacted continuity plans that send some traders to backup offices.

Recovery times from the surgery can vary, but it typically takes at least a month, including a week in the hospital, according to Johns Hopkins Medicine.

Edward Jones analyst James Shanahan said he’s relieved to hear the surgery was successful and that Mr Dimon is on the mend. “Until he is ready to return, JPMorgan is in capable hands,” Mr Shanahan said. JPMorgan “has, perhaps, the deepest bench in North American banking.”

Aortic dissection is relatively uncommon, primarily striking men in their 60s and 70s, according to the Mayo Clinic. It can quickly become life-threatening. Blood surges through the tear, causing the inner and middle layers of the aorta to separate or dissect.

“If the blood-filled channel ruptures through the outside aortic wall, aortic dissection is often fatal,” according to the Rochester, Minnesota-based clinic.

Patients with the most severe form of the condition, known as type A, are most likely to undergo surgery.

About 17 per cent of those patients die in the hospital or within 30 days, according to a study published in September 2019 in the Scandinavian Cardiovascular Journal. Those who do well after surgery have a low mortality rate of about 3 per cent.

Mr Dimon was diagnosed with throat cancer in 2014 and underwent radiation treatment and chemotherapy. At the time, the bank’s board emphasised that it works hard to ensure leadership talent is on hand in case of an emergency.

At the beginning of 2018, Mr Dimon handed off some responsibilities to lieutenants Mr Smith and Mr Pinto as part of succession planning.

“For now, Smith and Pinto should be able to effectively manage current challenges, including JPMorgan’s response to the coronavirus outbreak.”

Mr Smith (61) runs the sprawling consumer bank with its 5,000 branches and major credit-card business. Mr Pinto (57) oversees the investment bank and has helped JPMorgan surge to the top of Wall Street’s trading ranks.

Yet neither will necessarily be the board’s pick once Mr Dimon is ready to step down, as other executives have been climbing the ranks, too.

The board’s lead director, Lee Raymond, said the company will continue to serve its stakeholders with confidence. “We have exceptional leaders across our businesses and functions – led by our outstanding CEO and co-presidents,” he said in a statement.

Even if Mr Dimon returns soon, his medical emergency will renew pressure on the board to further develop its plans and groom a potential future CEO.

“For a company of this scale, they must have a succession plan for that position,” said Louis Tse, Hong Kong-based managing director of VC Asset Management. “They need a successor for the role.” – Bloomberg