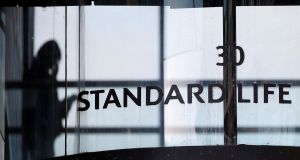 Standard Life Aberdeen said it would take a £40 million charge against intangible assets related to the contract with Lloyds. Photograph: Reuters

The Lloyds Banking Group mandate represents close to a fifth of Standard Life Aberdeen’s assets under management, which have already fallen from £670 billion to £646 billion because of a wave of investor redemptions and despite the uplift from near record equity prices.

A key rationale for the deal was to create a group with the scale to compete on the global stage. However, the notice terminating the Lloyds mandate is greater than the entire assets under management at Man Group, the UK’s third-largest listed asset manager.

The loss of the contract looks particularly bad for Martin Gilbert, Aberdeen’s chief executive at the time of the merger, who runs the enlarged group alongside Keith Skeoch, his Standard Life counterpart. The Lloyds contract represented a third of Aberdeen’s assets.

Standard Life Aberdeen shares fell by as much as 10 per cent before closing 7.5 per cent lower.

Mr Gilbert said he was confident in Standard Life Aberdeen’s future and dismissed concerns the business was going into reverse.

“We are obviously disappointed we didn’t reach agreement. Clearly, they are an important client,” he said, adding the potential loss of the contract was a “known risk” at the time of the merger.

Aberdeen gained the right to manage the assets when it acquired Scottish Widows Investment Partnership from Lloyds in 2014. But Lloyds had the right to end the contract if Aberdeen merged with a competitor.

The potential loss of the contract was flagged in the deal’s “risk factors” but the Lloyds announcement came as a surprise.

Standard Life Aberdeen said it would take a £40 million charge against intangible assets related to the contract with Lloyds, which has given 12 months’ notice to terminate the partnership between the two companies.

Arnaud Giblat, analyst at BNP Paribas, said the company earned a fee of 0.12-0.13 per cent on the assets it managed for Scottish Widows. “We would expect small marginal costs to manage these assets and thus estimate that the hit to earnings is less than 10 per cent.” He added that there was a small chance the company could still keep the contract on a lower fee.

Antonio Lorenzo, chief executive of Scottish Widows, said: “Given the merger of Standard Life and Aberdeen has resulted in our assets being managed by a material competitor, it is now appropriate to review our long-term asset management arrangements to ensure they remain up to date and that customers continue to receive good service and investment performance.”

“Therefore, we will begin an in-depth assessment of the market to identify a long-term strategic partner, or partners, to manage the current £109 billion of assets.”

There has been speculation that Lloyds had been considering a sale of Scottish Widows to Standard Life. But the insurer is now expected to be a central part of the bank’s aim to expand in financial planning and pensions as part of the three-year strategy it is due to present next Wednesday.

Asset managers that specialise in picking stocks are under intense pressure from the rise of lower-cost passive funds. Aberdeen and Standard Life agreed to merge as part of efforts to cut costs and gain scale.

The company, which completed the merger in August, suffered large redemptions by investors that made it one of Europe’s worst-selling asset management houses in 2017. – Copyright The Financial Times Limited 2018