Michael Walsh agrees to three-year disqualification and a fine of €20,000 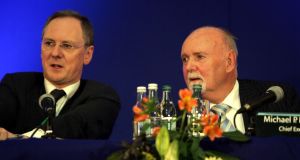 Dr Walsh, who has also been fined €20,000, joined the board of the INBS in 2001. He resigned suddenly from his position as chairman in February 2009 as the extent of the banking crisis was becoming evident.

The resignation came a day after INBS saw its debt rating downgraded by Moody’s to within one level of junk status and two months after the society found itself at the centre of controversy linked to the treatment of loans belonging to the former Anglo Irish Bank chairman Sean FitzPatrick.

A former professor of banking and finance, Dr Walsh was appointed to the board of IIU in December 1994 and remained a director after his departure from Irish Nationwide.

He stood down as a director of IIU in November 2011, the day after it emerged that the Central Bank was to assess whether he was fit and proper to serve as a director.

In a statement on Monday, the Central Bank said Dr Walsh had entered into a settlement with the regulator in relation to breaches of financial services law between August 1st, 2004, and September 30th, 2008.

Dr Walsh was not, during the period in question, directly engaged in the day to day management of INBS.

These contraventions relate to INBS’s management of commercial loans and credit risk. Dr Walsh was also a member of the society’s audit committee from 2001 until June 30th, 2008.

The settlement with Dr Walsh concludes the Central Bank’s inquiry against him, but the regulator emphasised that the settlement relates to Dr Walsh alone and has no effect on ongoing proceedings related to other individuals before its inquiry.

The admissions by Dr Walsh concern his ultimate responsibility as non-executive chairman of INBS, for certain breaches of financial services law admitted by INBS relating to its management of commercial loans and credit risk.

Specifically, the breaches admitted by Dr Walsh relate to the society’s credit committee’s failure to function in accordance with INBS’s internal policies.

Secondly, the breaches concern INBS’s failure to provide certain reports relevant to commercial lending and credit risk management to the board of directors in accordance with internal policies.

“Dr Walsh took a variety of steps to address these issues which were flagged by various internal and external reports during the review period but accepts responsibility as non-executive chairman for the fact that these issues were not fully addressed.”

The Central Bank said the sanctions imposed on Dr Walsh “reflect the seriousness” with which it regards these issues.

In deciding on the appropriate sanctions to impose, it took account of Dr Walsh’s role as chairman of INBS, and its failure to properly manage its commercial lending and credit risk management in accordance with internal policies.

It also took account for the period of time during which Dr Walsh participated in the prescribed contraventions, and the degree to which this departed from the standards expected by the Central Bank of non-executive directors.

The regulator said it also accounted for the need for an “effective deterrent impact” on other financial services providers and individuals concerned with their management, including, in particular, non-executive directors.