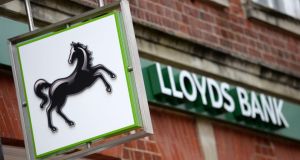 Now the British government has reduced its stake in the bank to 5.95 per cent, it is no longer the lender’s largest shareholder. Photograph: Andrew Matthews/PA Wire

Britain has cut its stake in Lloyds Banking Group to below 6 per cent as it attempts to return the lender to full private ownership this year.

UK Financial Investments Limited (UKFI), which manages the government’s stake in the bailed-out bank, resumed share sales in October 2016, having halted them almost a year ago because of market turbulence.

Lloyds said in a statement on Monday that the government has reduced its stake in the bank by a further percentage point to 5.95 per cent, meaning it is no longer the lender’s largest shareholder.

Lloyds was rescued with a £20.5 billion taxpayer-funded bailout during the 2007-09 financial crisis, leaving the state holding 43 per cent.

Britain’s finance ministry has now recovered over £18 billion, Lloyds said in the statement.