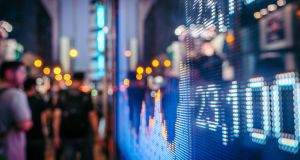 Global equities rallied for a second straight day on Wednesday while safe-haven assets such as US bonds and the Japanese yen slipped to multi-week lows as investors bet the escalating US-China trade spat would inflict less damage than feared.

The deepening tariff row between the United States and China threatens to disrupt supply chains and undermine the world economy, with Beijing adding $60 billion of US products to its import tariff list in retaliation for US president Donald Trump’s planned levies on $200 billion of Chinese goods.

But markets appear to have taken cheer from China’s move to levy only a 10 per cent duty on $60 billion of US imports. Washington too removed some 300 Chinese-made items from the list of dutiable goods.

World growth is undoubtedly at risk - a survey by ThomsonReuters and INSEAD showed confidence among Asian companies at the weakest in almost three years as businesses feared blowback from the trade war. Germany’s IW economic institute lowered its growth forecast for the biggest euro zone economy, noting the fallout from the trade dispute.

But hopes of Chinese stimulus to counter the impact on the economy, as well as a pledge by premier Li Keqiang not to use yuan devaluation as a tool in the trade war, reassured investors to some extent, allowing markets to build on Tuesday’s gains. MSCI’s index of global equities rose 0.2 per cent to a two-week high, while emerging stocks too firmed for a second day, led by a one percent jump in Shanghai markets. An index of non-Japan Asian stocks also rose one percent Government bonds from the United States and Germany, typically instruments that benefit from political or economic turmoil, saw yields race to multi-week highs.

US 10-year yields stayed firmly above the key 3 per cent mark . “Where we are today is in a period of relative calm as U.S. bond yields probe their highs, and we become accustomed to trade rhetoric and perhaps, blase about the economic damage it will cause,” said Societe Generale strategist Kit Juckes. “All things considered, though, the tariff spat could have been a lot worse. Investors reacted relatively well to the news.”

European shares followed Asian counterparts higher though US equity futures pointed to a flat opening for Wall Street following Tuesday’s bounce. Analysts noted that US Treasury Secretary Steven Mnuchin last week had invited Beijing to a new round of talks but some also reckon on a more conciliatory stance from China.

“China are out of bullets. The fight is done and dusted. Now it’s just a question of how the Chinese can save face and say ‘alright we’re going to change, going to open up wider access not only to the US but to the EU and Japan’,” said Christopher Peel, chief investment officer at Tavistock Wealth in London. “Their economy is export-led, they can’t afford for it to go out of control.”

But for now, the yuan was lifted by Premier Keqiang’s pledge, touching its highest level since last Friday at 6.843 per dollar. That in turn allowed an index of emerging currencies to rise for the second day in a row.

In another sign of markets’ new-found optimism, the safe-haven yen slipped to two-month lows against the dollar . The dollar inched higher but stayed close to seven-week lows against a basket of currencies.

Investors also sold government bonds, pushing up yields on US Treasury bonds to the highest since May while German yields surpassed 0.5 per cent for the first time since mid-June .

Meanwhile, Britain’s exit from the EU will be discussed at a European Union summit in Salzburg. The pound rose half a per cent to $1.3215 after data showed inflation hitting a six-month high. It then fell as low as $1.3098 after the Times newspaper reported Prime Minister Theresa May was set to reject the EU’s updated offer on the Irish border problem. – Reuters