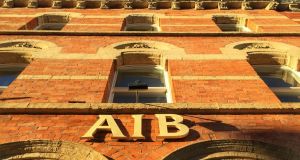 Cork, Ireland - November, 8th 2015: Facade of AIB Bank with AIB sign visible in the centre of the shot.

Shares in AIB rallied from near all-time lows on Wednesday afternoon as it emerged that the lender’s next portfolio of problem loans to be put on the market will contain debt with a par value of €1 billion.

The bank, which has lowered its non-performing loans (NPLs) from a peak of €31 billion in 2013 to €7.2 billion, or the equivalent of 11 per cent of total loans, has set its sights on what it calls “normalised levels by the end of 2019”.

Banks with high levels of soured debt in the euro zone are coming under pressure from regulators to reduce their NPLs ratio to the European average, which currently stands at about 3.5 per cent.

AIB had largely been relying on debt restructuring and an improving economy to reduce its ratio in recent years. However, it accelerated the decline in the first half of 2018 through the sale of €1.1 billion portfolio - dubbed Project Redwood - to a consortium led by US distressed-debt firm Cerberus.

A long-anticipated follow-up portfolio will contain €1 billion of buy-to-let and business loans, Bloomberg first reported on Wednesday. Sources have independently confirmed the figure for the portfolio, known as Project Beech.

A spokesman said that 90 per cent of the group’s NPLs reduction over the past five years “has been achieved through working with customers on a case-by-case basis”.

“We remain focused on reducing impaired loans to a level more in line with European norms and, where feasible, we will continue to implement sustainable solutions for customers who engage with the bank,” it said, declining to comment specifically on the planned Project Beech transaction.

AIB shares spiked by as much as 1.6 per cent on Wednesday afternoon to €3.80, having traded earlier at €3.748. That was marginally above the €3.742 level hit last week as AIB reached its lowest level since the State sold a 28.8 per cent stake in the bank on the stock market in June last year at €4.40 a share.