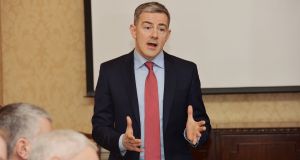 Permanent TSB (PTSB) director of operations Shane O’Sullivan, the internal runner-up in the recent search for a new chief executive for the lender, has signalled he is leaving the company.

Mr O’Sullivan’s plans to quit PTSB at the end of January to pursue “other opportunities” were announced to staff last week. He has been with PTSB for two decades and was given responsibility for the management of its massive bad loans book following the last economic crash.

The imminent departure leaves a second senior management opening at PTSB, after Eamonn Crowley was promoted in June from chief financial officer to CEO. Mr Crowley has also had to continue as interim finance chief since then, as the group searches for a permanent replacement.

A spokeswoman for the bank confirmed that Mr O’Sullivan, who has served on PTSB’s top executive committee since 2013, was stepping down.

“Shane’s contribution has been critical to the bank’s recovery,” Mr Crowley said in an internal email. “He has been a key figure here for over two decades and his career has had many highlights.”

Mr O’Sullivan’s decision to leave PTSB comes a little more than a month after AIB’s deputy chief executive Tomás O’Midheach said he was leaving that group to head up insurer FBD Holdings. Mr O’Midheach was among shortlisted candidates for the top job at AIB before Colin Hunt secured the role early last year.

The departures also occur against the backdrop of pay restrictions and a bonus ban that have been in place across bailed-out lenders since the last financial crash.

Last month, PTSB reported a higher-than-expected €75 million charge for the first half of the year to cover an expected surge in bad loans as Covid-19 loan payment freezes of a maximum six months come to an end, and as it cut the value of 340 repossessed residential properties on its books.

The bank posted a €54 million net loss for the period, compared with a €21 million profit for the same period in 2019, it said in its interim report.

Mr Crowley said in June, as he was unveiled as chief executive, that he plans to redouble the bank’s efforts to crack the small-business lending market and generate more income from fees, as he acknowledged it has “a slightly higher mountain to climb” than rivals in dealing with challenges facing its sector.

PTSB’s SME lending amounted to €47 million last year, having more than doubled off a very low base in 2018. Mr Crowley also highlighted that the bank generates only 10 per cent of its income from fees, compared with 30 per cent at Bank of Ireland and AIB and 20 per cent at Ulster Bank.