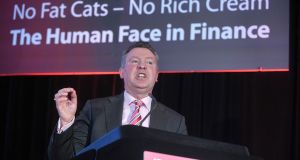 Larry Broderick: “I fail to see the logic behind a withdrawal from the Irish market and the subsequent loss of talent that KBC Ireland, and by extension the wider group, would suffer.” Photograph:Tommy Clancy

The head of the Financial Services Union in Ireland has written to the global chairman and chief executive of KBC Bank in Belgium to urge them to retain ownership of their Irish subsidiary.

The letter, sent last week by the FSU’s general secretary, Larry Broderick, describes KBC Bank Ireland as one of the “most valuable assets” in the group. It comes as KBC prepares to reveal the outcome of a strategic review of the Irish business when its publishes its fourth-quarter results on February 9th.

The Belgian bank has outlined three scenarios for the Irish business – organically grow the bank, build a captive bank insurance group or sell the business.

In his letter to KBC’s chairman Thomas Leysen, and chief executive Johan Thijs, Mr Broderick noted speculation surrounding the future of the Irish bank had “weighed heavily” on staff “as they consider the impact various outcomes will have on their careers and on their families”.

KBC does not recognise trade unions in Ireland, although a number of its staff are members of the FSU. “We have also been contacted by staff at the bank who are not members of our union but are seeking advice and guidance at this uncertain time,” Mr Broderick said.

He said there were “many reasons” why KBC should retain and expand its Irish operation, noting that it had invested “significantly in developing its brand and attracting a loyal customer base” in recent years.

“It would defy logic that the time, effort and resources invested in establishing and growing the business would be jettisoned, particularly if the bank opts to withdraw from the market,” he added.

“I fail to see the logic behind a withdrawal from the Irish market and the subsequent loss of talent that KBC Ireland, and by extension the wider group, would suffer.”

In addition, Mr Broderick noted that the Government has a strategic plan to grow international financial services, by adding 10,000 net new jobs by 2020.

“In short, Ireland has the determination and capacity to be a leader in financial services and, as a forward-thinking institution, I would hope that KBC Bank sees itself as part of that future,” he said.

The FSU chief also cited the improving economic conditions in Ireland. “In recent years employment had steadily grown, economic activity is increasing and national finances have been vastly improved. There are still many areas of the economy and social policy that require investment and reform but Ireland can be confident of its medium-term economic future and we would hope that [the] KBC group sees itself as part of that future.”

Mr Broderick closed his letter by urging KBC to retain the business here. “In conclusion, can I say that our members, and indeed other staff, at KBC Ireland have endured a lot of uncertainty and worry in recent weeks.

“They have built a profitable, innovative bank and I know they want to continue to grow the bank, serve their loyal customer base and develop their own careers. I would urge you to retain KBC Ireland.”

1 Wetherspoon’s panto-villain chairman may have the last laugh
2 UK needs to be honest about its Covid-19 strategy
3 British exceptionalism backfires in style as Johnson tests positive for coronavirus
4 Will Covid-19 force Primark to rethink decision not to sell online?
5 Retail landlords worried rents will dry up during Covid-19 crisis
6 ESB paying exchequer €88m dividend a pointless exercise
7 I was a gig economy employee with a virus who couldn't afford to self-isolate
8 Volkswagen burning through €2bn in cash per week
9 Remote working doesn’t suit everyone, and it exposes woolly leadership
10 ESRI warns Ireland heading for recession this year as Covid-19 hits economy
Real news has value SUBSCRIBE