Bank of Ireland to spend €500m on enhancing software 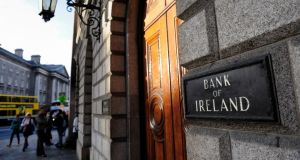 Shares in Bank of Ireland dropped as much as 2.6 per cent in Dublin in early trading. Photograph: Frantzesco Kangaris/Bloomberg

Bank of Ireland is planning to invest about €500 million over the next number of years to modernise its group IT infrastructure.

Dubbed Project Omega, the programme of investment is expected to run for more than five years, with the aim of upgrading the bank’s systems to provide an enhanced customer service while also introducing efficiencies into the company’s operating model, The Irish Times has learned.

It will represent the biggest such investment by the bank to date in its technology platform, and signifies the growing importance of digital services in the financial sector.

At the publication of its half-year results in July, Bank of Ireland said more than 59 per cent of personal and 83 per cent of small business loans were delivered either online or by phone in the six-month period, and it had 440,000 mobile customers.

As part of this investment, Bank of Ireland has selected listed Swiss group Temenos to provide software for its new core banking and channels platform.

Called UniversalSuite, the Temenos product is described as a “front-to-back solution for retail, commercial and corporate banking” and is used by more than 400 banks across the world.

Headquartered in Geneva, Temenos’s customers include 38 of the top 50 banks, which rely on it to process the daily transactions of more than 500 million customers.

Temenos says its software is “proven to reduce banks’ infrastructure costs at the same time as enabling them to deliver enhanced customer centricity at scale and capitalise” on banking initiatives.

“Bank of Ireland intends to use UniversalSuite’s real-time analytics and integrated digital channels to deliver highly personalised and interactive customer experiences,” the Swiss company said in a stock market announcement.

Its chief executive, David Arnott, said: “Temenos is delighted to be working with Bank of Ireland on this significant core banking project. Banks across the world are making strategic decisions to put digital at the heart of their growth plans and system replacement is the foundation for this.

“Following recent agreements with Nordea Bank and Standard Chartered Bank, this deal further demonstrates that Temenos is the established technology partner for the digitisation of the financial services industry.”

In the same release, Bank of Ireland chief executive Richie Boucher said: “Our focus over the next several years is on adopting, integrating and moving on a careful and phased basis to more scalable and modern platforms that position us for long-term sustainability and competitiveness. We are pleased to work with Temenos, which has a proven track record globally in delivering best-practice core banking systems.”

While Bank of Ireland, which is 14 per cent State-owned, has secured a software provider, a large part of the multi-year project will revolve around implementation.

1 Why gift a son now if it eats into his tax-free inheritance threshold?
2 Flights abroad ban could last all summer
3 Government to avoid ‘cliff-edge’ on Covid-19 payment changes
4 Chris Johns: Economic self-harm is the root of populism
5 A perfect workspace between home and office
6 French company Infravia to buy Mater Private
7 No free lunch on coronavirus cash payments
8 Incoming Central Bank Governor to receive salary of €286,790
9 Indoor vertical farming is the future says Irish agritech start-up
10 Coronavirus: Over 1m workers may face tax bills of up to €2,800 at end of the year
Real news has value SUBSCRIBE