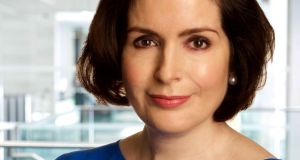 Bank of Ireland chief executive Francesca McDonagh: “We are treating this matter very seriously and we’ll be making a statement in due course.”

Bank of Ireland’s new chief executive, Francesca McDonagh, who inherited the tracker mortgage problem when she succeeded Richie Boucher three weeks ago, insisted on Monday that she was taking the issue “very seriously”.

In a brief statement after meeting Minister for Finance Paschal Donohoe, Ms McDonagh said: “We listened very carefully to what the Minister had to say and his concerns. We are treating this matter very seriously and we’ll be making a statement in due course.”

Ms McDonagh, a former executive with HSBC in the UK, was the second of three bank chief executives to meet the Minister on Monday as the Government sought to pile pressure on lenders to deal with the tracker crisis decisively after almost two years of examining their loan books under the eyes of the Central Bank.

Bank of Ireland said last month it had identified 602 customers who were refused their entitlement to a tracker mortgage. In addition, the bank overcharged 3,654 tracker-rate customers who had been paying an average of 0.15 per cent more than they should have been. It plans to start paying redress and compensation “within weeks,” a company spokeswoman said last week.

The bank has known of problems in its tracker portfolio since at least 2010, when it was forced to put 5,100 customers on the wrong rate on to the correct one.

Meanwhile, the chief executive of KBC Bank Ireland, which is alone among the country’s five biggest mortgage lenders in not having given any indication to date of its number of affected tracker mortgage customers, told reporters he planned to issue a statement “later this week”.

“The Minister conveyed the Government’s great concern around the matter to us,” said Wim Verbraeken, the bank’s chief executive, who was the first banker to meet Mr Donohoe on Monday morning. “We’ve undertaken to revert to the Minister on the matters discussed and we anticipate [we’ll] be in a position to issue a statement later this week.”

“We recognise the seriousness of the issue,” Mr Masding said. “We confirmed to him that we continue to work night and day to fix it and we’ll be making a further statement this week.”

He reiterated an apology to customers, and said his institution wanted to pay compensation by Christmas.

Permanent TSB was the first lender to come under public scrutiny for the tracker-mortgage issue, when it disclosed in July 2015 that 1,372 customers had been denied their rights to a low-cost loan.

The bank said last month that 98 per cent of these customers have been redressed and compensated. However, PTSB has also identified 579 additional overcharging cases as part the subsequently Central Bank-driven industry-wide examination.

1 Coronavirus: Journal Media to cut pay by up to 20 per cent
2 Coronavirus: Notion of a rapid economic recovery is at best wishful thinking
3 Nice to see you: Which is the best video calling option around?
4 Frontline bank workers to get pay top-ups during Covid-19 crisis
5 Will the coronavirus crisis rehabilitate the world’s banks?
6 NTMA to raise billions of euro for State in bond sale amid Covid-19
7 Mother of invention: the new gadgets dreamt up to fight coronavirus
8 Fierce backlash to Dutch hard line on eurobonds
9 New car sales tumble 63% as coronavirus crisis bites motor trade
10 British American Tobacco working on Covid-19 vaccine
Real news has value SUBSCRIBE