Former top HSBC banker found guilty of fraud in US

Bank’s former head of global cash foreign exchange trading, faces up to 20 years in prison, after conviciton on defrauding client 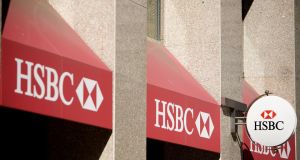 A former top HSBC banker has been found guilty of defrauding a client in a $3.5 billion currency deal, a landmark legal decision that could have far-reaching implications for the workings of the $5.3 trillion-a-day foreign exchange market.

Mark Johnson, who was the bank’s head of global cash foreign exchange trading, faces up to 20 years in prison after he was found guilty on nine counts, according to a spokesman for US prosecutors. He was found not guilty on one other count.

Johnson (51) looked at the floor as early guilty counts were read out, according to a person present. He will be sentenced at a later date.

The conviction of the British citizen is a boon to the US department of justice, which has suffered a string of setbacks with other recent transatlantic cases.

The jury’s verdict in the front-running case came after two-and-a-half days of deliberation in a giant Brooklyn courthouse, 20 miles from where Johnson was first arrested at John F Kennedy Airport.

US authorities said Johnson exploited confidential information from Cairn Energy, the UK oil and gas company, which hired HSBC to convert the proceeds of an asset sale from dollars to sterling.

They said he orchestrated a scheme to deal for HSBC before trading on behalf of the client, tipping off colleagues through code phrases such as “my watch is off” and netting an illicit profit of more than $7 million.

During the trial, which lasted about three weeks, the defence argued that “pre-hedging” was standard practice in the industry and that Cairn got a “fair” price.

Yet jurors were played a taped excerpt during which Johnson learned of Cairn’s decision to press ahead with the trade despite a rising cost. “Ohhh, f***ing Christmas,” he said. He also discussed how high the pound might go before Cairn would “squeal”.

Andrew Vale, assistant director in charge of the FBI’s Washington field office, said: “We are working vigorously to ensure integrity is upheld in financial services industries. We will continue to work with our law enforcement partners to investigate and prosecute those who engage in illegal business practices.”

The DoJ is seeking the extradition from the UK of Johnson’s former colleague and alleged co-conspirator, Stuart Scott, on the same charges.

Mr Scott, another Briton who was HSBC’s head of currency trading in London, is resisting extradition and denies the charges. His fate will be decided by a London magistrates’ court this week. It will not deliberate on whether he is guilty of the alleged offences, however.

US prosecutors are gearing up for other trials following an investigation by the DoJ and UK authorities into manipulation of the forex market. Banks have already paid a total of nearly $10bn in fines in the years since the scandal.

The DoJ has also filed charges in another case against three British-based traders dubbed the “cartel”. They deny the charge of price-fixing and have not fought extradition, and have attended the pre-trial hearings in New York. – Copyright The Financial Times Limited 2017