Andrew Bailey confirmed as new head of Bank of England 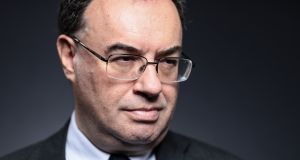 Andrew Bailey: said he was honoured to take over from Mark Carney as head of the Bank of England, ‘particularly at such a critical time for the nation as we leave the European Union’. Photograph: Simon Dawson/Bloomberg

Britain’s new government named Andrew Bailey as the next Bank of England boss on Friday, entrusting one of the City of London’s most experienced regulators with steering the world’s fifth-biggest economy and its vast finance industry through Brexit.

Mr Bailey worked for 30 years at the Bank of England, where he was central to efforts to shore up the British banking system during the global financial crisis.

In 2016 he moved to his current role running the Financial Conduct Authority (FCA), which is responsible for cracking down on financial misconduct.

“Andrew was the stand-out candidate in a competitive field,”chancellor of the exchequer Sajid Javid told reporters. “He is the right person to lead the bank as we forge a new future outside the EU and level-up opportunity across the country.”

Mr Bailey said in a statement that he was honoured to take over from Mark Carney as head of the Bank of England, “particularly at such a critical time for the nation as we leave the European Union”.

Britain had delayed naming Mr Carney’s successor since last year with the country focused on Brexit – the impact of which remains a big challenge for the central bank – and on an election emphatically won by prime minister Boris Johnson last week.

Mr Carney has agreed to delay his departure to March 15th from a previously scheduled date of January 31st.

Mr Bailey’s role in containing the 2008-09 near-meltdown of the financial sector means he is a familiar face to top officials at the US Federal Reserve and other major central banks.

“When he was in the room you were confident you had someone who was worth listening to and, importantly, also had the solution to what the problem might be,” a former official involved in tackling the crisis said, speaking on condition of anonymity.

Mr Bailey’s typically low-key approach offers a contrast to the high-profile style of Carney. His supporters say he knows how to use the BoE’s sweeping powers without alienating London’s powerful bankers, but critics have accused him of pulling his punches when it came to punishing miscreants in the industry.

Mr Bailey beat other candidates seen as more likely to get the BoE’s top job – and its advertised annual salary of £480,000 – including another former deputy governor, Minouche Shafik, who now heads the London School of Economics.

Mr Shafik was rejected by Johnson because of her critical views on Brexit, the Financial Times said.

Mr Bailey also has been criticised for not publishing in full a report into alleged misconduct by another British bank, RBS

Mr Bailey is viewed as pro-European by the City but has sought to be outwardly neutral on Brexit, starting each speech by saying the FCA takes no position on the issue. He has also repeatedly said that Britain, the largest financial centre in Europe, must not become a permanent “taker” of EU rules after Brexit for banks in Britain to have access to the bloc – a nod to backers of leaving the EU.

Mr Bailey succeeded the tough-talking Martin Wheatley at the FCA, leading to suggestions that the finance minister at the time, George Osborne, wanted someone less confrontational.

Last year, the FCA fined Jes Staley, chief executive of Barclays, £1.1 million after he tried to identify a whistleblower who sent letters criticising an employee of the banking group. Lawmakers said the penalty was too lenient.

Mr Bailey also has been criticised for not publishing in full a report into alleged misconduct by another British bank, RBS. He cited privacy restrictions.

His chances of getting the BoE job were seen to have been further dented with the suspension of Woodford, an equity fund popular with retail clients who now face large losses on their investments.

Mr Bailey has said the FCA’s actions in the case were limited by European Union rules.