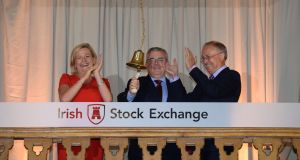 AIB may look to international expansion once more as the bank beds down its Irish operations and returns to growth.

Speaking to Bloomberg television, chief executive Bernard Byrne said it is something that will be reviewed in three years ro so.

“I think for now and the next number of years, two to three years, we’ll be continuing to do what we’re doing at the moment,” he said, noting that the bank currently has a presence in the UK, as well as a “small footprint” in the US.

However Mr Bryne didn’t rule out AIB, which sold off its stake in Polish bank Bank Zachodni in 2013 and divested its stake in US bank Allfirst in 2002, ramping up its international expansion plans once more.

“For now it’s really about efficiency in what we’re doing; but beyond the three year horizon we’ll come back and talk about that later,” he said.

Mr Byrne also ruled out government interference in the bank, which is still 70 per cent owned by the state, after the state sold a 25 per cent stake in the bank last week for €3.4 billion. Unconditional dealings in the stock commenced on Monday morning.

“We run the business very commercially on our own,” he said, “The board is totally responsible for the day-to-day strategic direction of the company”.

On non-performing loans, Mr Byrne said that about another “€5-€6 billion” has to come out of the bank’s total number, and it will achieve this by working through restructurings - “a strong economy helps” as well as portfolio sales “where necessary”.