Staff shocked by extent of closures, which amount to half of bank’s branch network 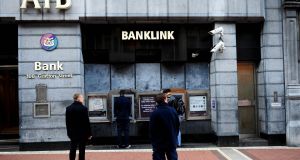 AIB, which is preparing for a partial flotation, launched a review of its business some months ago. Photograph: Bloomberg

First Trust, which is part of AIB, has announced it will close 15 branches in the North over the next seven months. This amounts to half of the bank’s branch network.

The scale of the branch closures has shocked the bank’s employees, according to the general secretary of the Financial Services Union (FSU), who described the move as a “serious blow for staff, customers and the Northern Ireland economy”.

There had been strong industry speculation for some time in the North that First Trust was planning to overhaul how it operated.

FSU general secretary Larry Broderick said staff had been aware of an ongoing restructuring plan, but had been shocked by the extent of AIB’s plan.

“Great teams in bank branches, many who have served their community for many years, now face the prospect of closure and relocation,” the union leader said.

The head of First Trust bank in Northern Ireland, Des Moore, said the decision to close 15 branches had been taken after an 18-month strategic review to “plan how we best serve the needs of customers now and in the future”.

AIB is preparing for a partial flotation, which is expected to occur at some point later this year. The State owns 99.9 per cent of the bank, with 25 per cent of this earmarked for the stock market.

“We will be working hard to minimise the impact on the customers and staff concerned.”

He said the bank, through AIB Group, had a “significant £10 million investment strategy for personal and business customers, including five new business centres” in its Ballymena, Dungannon, Enniskillen, Derry and Newry branches.

First Trust said it had also has entered into a partnership with the Post Office, so that its customers will be able to use 500 post offices across the North for their banking business.