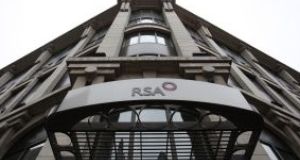 Three former RSA Insurance Ireland staff have been fined a combined £182,000 (€206,090) under sanctions tied to an investigation by a UK accounting watchdog into financial irregularities at the firm in 2012.

The UK Financial Reporting Council said that RSA Insurance Ireland’s former head of finance Rory O’Connor admitted that his “conduct fell significantly short” of the standards reasonability to be a member of the Chartered Institute of Management Accountants, when he approved “materially inaccurate financial statements” for the business for the three years through 2012.

Mr O’Connor, who was initially suspended when news of the scandal emerged in November 2013 before being sacked two months later, has been excluded from the accountancy institute for three years. While a £50,000 fine imposed by the watchdog was reduced to £35,000 “after mitigation and a settlement discount”, Mr O’Connor also faces having to pay a £18,000 contribution to the watchdog’s executive counsel’s costs.

RSA Insurance Ireland’s former chief actuary Martin Ryan has admitted he breached “core principles of competence and care and compliance when he signed inaccurate statement of actuarial opinion” and submitted them to the Irish Central Bank between 2009 and 2012, the UK watchdog said. He faces a reduced fine of £101,500 and a £11,000 contribution to executive counsel’s costs and a number of professional limitations for three years.

Former RSA Insurance Ireland actuary Gerard Bradley must pay a reduced £45,000 fine and £3,500 costs contribution after he breached core compliance principles between 2009 and 2010 by failing to act as whistleblower or “provide sufficient challenge regarding the operation of an inappropriate claims reserving practice” in the insurance firm.

The Dublin-based insurer’s London-listed parent RSA Insurance Group injected €423 million of cash between 2013 and 2015 after the country’s once-largest insurer was thrown into crisis when it emerged it had a large hole in its balance sheet. This was mainly the result of the business having been found at the time to have set aside too little money in reserve to cover large claims.

Last March, the UK group made a further €90 million available to the Irish business, if needed, to bolster its balance sheet after new new insurance capital rules, known as Solvency II, came into effect.

RSA Group last year settled a legal dispute with Philip Smith, the former chief executive of the Irish unit, who had been awarded €1.25 million in 2015 by the Employment Appeals Tribunal relating to his acrimonious departure in the wake of the accounting controversy.

The Irish business returned to operating profit in the first half of last year, helped by an 18 per cent surge in insurance rates. The group is scheduled to report full-year figures on Thursday.