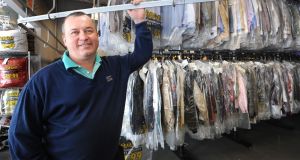 John Rusnak: pleaded guilty in 2002 to defrauding AIB’s former US unit where he had worked, Allfirst Financial. He was sentenced to seven and a half years in prison. Photograph: Baltimore Sun

AIB received only a fraction of the $872 million (€781.7 million) it had sought from Citigroup when it agreed last year to settle a 12½-year case against the US bank in relation to the John Rusnak trading scandal.

The Irish Times has established that the amount received by AIB under a settlement struck in January 2016 came to less than 5 per cent of its original claim.

The figure was accounted for in AIB’s 2015 financial accounts under the section of “income on settlement of claims”, which came to €38 million. It was not possible to ascertain the exact settlement amount.

AIB filed the original lawsuit in 2003 in Manhattan federal court in New York, claiming that units of Bank of America and Citigroup had joined Mr Rusnak’s scheme in 2000 by opening accounts for him and that brokers at the US firms had helped conceal his losses, which ran to almost $700 million. The losses were revealed in February 2002.

Mr Rusnak pleaded guilty in 2002 to defrauding AIB’s former US unit where he had worked, Allfirst Financial. He was sentenced to 7½ years in prison. AIB had accused Citigroup’s Citibank unit, which was Allfirst’s prime broker, of enabling Mr Rusnak’s sham transactions, including disguised cash advances and fake trades.

AIB dropped the lawsuit against Bank of America in 2012 and the settlement with Citigroup emerged in January 2016, just weeks before a long-awaited trial was scheduled to begin in the US.

Citigroup’s Citibank NA said in court filings before the case was due to start that none of its employees had “committed any fraud or aided and abetted the fraud of anyone else”.

The $872 million that AIB had sought from Citigroup included $500 million of compensatory damages, plus punitive damages.

AIB sold Baltimore-based Allfirst in 2003 to M&T Bank. AIB went on to sell its 24 per cent stake in M&T in October 2010 by placing its shares on the stock market, raising $2 billion, under efforts to gather funds to stave off nationalisation as its loan losses soared at the time.

The bank ended up being seized by the Government just before Christmas that year as part of its total €20.8 billion taxpayer bailout.

AIB returned to profit in 2014 for the first time since the crisis and the State is currently in the market seeking to sell as much as 28.8 per cent of its holding in a deal may raise as much as €3.8 billion. The initial public offering is expected to price next Friday.