AIB’s turnaround the source of much satisfaction 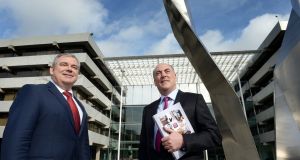 At the beginning of its analyst briefing yesterday, AIB chief executive Bernard Byrne reminded the audience how the bank’s bottom line performance has experienced a €12 billion turnaround since he joined the company in 2011. It’s gone from a loss of €10 billion to a profit of €1.9 billion in five years. “You don’t get to do that too often in your life,” Byrne beamed.

AIB’s new chief has every reason to be pleased with himself. This was the second year of profit for AIB after years of brutal losses in the wake of the 2008 financial crash. The number for 2015 was flattered by €925 million in provision writebacks but the underlying profit was still a healthy €1 billion – and that was against a backdrop of reductions in its standard variable mortgage rate.

AIB’s capital levels are now comfortably above regulatory requirements, feeding the narrative that the bank is once again on a sustainable footing and holding out the prospect of a pre-IPO special dividend for the State.

AIB’s results show strong momentum within the business. New mortgage lending amounted to €1.7 billion, and it wrote about one-third of new home loans in Ireland last year. Impaired loans fell by €9.1 billion. Its loan/deposit ratio is now at 100 per cent while its net interest margin, a key indicator of profitability, is once again running above 2 per cent. In addition, its operating expenses fell by 8 per cent last year and the bank had a sector-leading cost-income ratio of 49 per cent.

After years of retrenchment, the bank is now in the middle of an €870 million investment programme on IT to aid efficiencies and improve the customer experience. Last year saw AIB restructure its capital base, paving the way for an IPO of its shares, subject to market conditions and a decision by the Government. Byrne was keen to stress that the bank is ready to go to market whenever the State decides to press the button.

There are headwinds. The number of mortgage customers placed on a restructuring arrangement because of loan arrears rose to 37,300. The number of repossessed homes increased and it took a €105 million provision to help meet the costs of the tracker mortgage redress scheme established by the Central Bank of Ireland at the end of last year.

David Hall of the Irish Mortgage Holders Organisation estimates that some 3,000 AIB mortgage customers were denied a tracker rate. The bank’s pension deficit widened by €500 million in the first two months of this year, as markets were routed. These issues will be with the bank for years to come but they no longer dominate the story.

Byrne must be hoping that Fine Gael and Fianna Fáil can come to some arrangement to provide a stable government, at least until such time as AIB can IPO its shares. Returning to a main stock market listing and attracting institutional investors to its share register would be another step along the road to normalised banking nirvana.