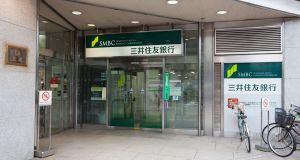 Sumitomo Mitsui Financial Group has signed a lease in Frankfurt making it one of the first foreign banks to commit to new office space in Germany’s financial capital ahead of Brexit. Photograph: iStock

Sumitomo Mitsui Financial Group has signed a lease in Frankfurt, according to people familiar with the decision, making it one of the first foreign banks to commit to new office space in Germany’s financial capital ahead of Brexit.

Japan’s second-biggest lender plans to occupy one floor in the Main Tower, a 56-story building in Frankfurt’s financial district, the people said, asking not to be identified because the plans are private. Sumitomo plans to put as much as 100 people in the office, one person said.

Each floor in Main Tower has about 1,200 sq m of office space, according to the building’s website.

The bank in July announced plans to set up banking and securities units in Germany to deal with the uncertainty caused by the UK’s vote to leave the European Union. Frankfurt has emerged as a particularly popular destination, with banks including Japan’s Nomura Holdings and Daiwa Securities Group also choosing the city as their post-Brexit EU base. Others such as Goldman Sachs Group, Citigroup and JPMorgan Chase have said they’ll expand their presence in Frankfurt.

Sumitomo Mitsui is establishing the Frankfurt unit to offer uninterrupted services after Brexit, it said in July. The plans are subject to regulatory approval and “further details” such as the units’ official opening dates would be announced in due course, the bank said.