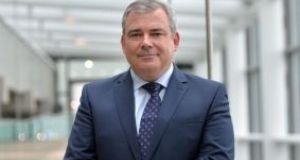 AIB paid its chief executive Bernard Byrne €587,000 in total remuneration last year, an increase of 3 per cent on 2014.

The balance of his remuneration comprised €12,000 in annual taxable benefits and €96,000 in a pension payment.

His predecessor David Duffy, who left AIB to lead Clydesdale Bank in Scotland, received €207,000 for his five months with the bank last year.

Details of executive pay were included in AIB’s annual report for 2015, published today.

It shows that chief financial officer Mark Bourke received €570,000 in total remuneration compared with €337,000 in 2014, when he served just more than seven months with the company. His basic salary last year was €450,000.

In total, AIB paid its executives and board members just under €2.7 million last year, down from just under €2.9 million in 2014.

The bank is 99.8 per cent owned by the State and adheres to the Government’s €500,000 cap on executive salaries.