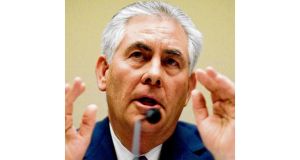 EXXON MOBIL, the largest US energy company, is offering stakes in two natural gas fields off the Irish coast for sale to help fund exploratory drilling.

Exxon Mobil is trimming its shares in the Dunquin fields for a second time in less than a year.

Exxon Mobil, headed by chairman and chief executive officer Rex Tillerson and based in Irving, Texas, sold half its stake to Italy’s Eni SpA in August.

“It’s on the margins of the North Sea basin, and it’s obviously not on the scale of what you’d find in the UK, North Sea or the Netherlands,” said Pavel Molchanov, an analyst at Raymond James Associates in Charlotte, North Carolina. “For a company with a resource base as large as Exxon Mobil’s, these aren’t material” amounts of gas.

Exxon Mobil operates and owns 40 per cent of the blocks, according to the posting.

In addition to Eni, partners include Providence Resources of Dublin and Sosina Exploration.

Exxon Mobil is soliciting offers for at least 10 per cent stakes in the fields. It said in the posting it expected a successful bidder to contribute to drilling costs.

Exxon Mobil and its partners agreed last year to drill an exploratory well. The planned site of the first well, which will be drilled in 1,700m of water, will be surveyed this year. The 16-year exploration licence governing the blocks expires in November 2020.

Petroliam Nasional Berhad, Malaysia’s state-controlled oil company, was in the market for offshore Irish gas assets last year when it paid $180 million for Marathon Oil’s Kinsale Head area gas fields and a stake in the Seven Heads field. Petronas, as the Kuala Lumpur-based company is known, sold a 40 per cent stake in Seven Heads in September to Providence. – (Bloomberg)