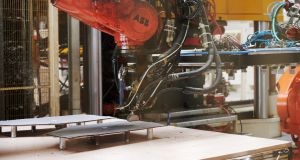 A BMW factory in Austria.

Industrial output in the 19-countries rose 0.1 per cent in September, marking the second straight month of expansion and resulting in a milder annual contraction than expected, according to official data from Eurostat.

Over the same month last year, euro zone industrial output was down 1.7 per cent, better than the 2.3 per cent fall expected by economists polled by Reuters.

“Cautious growth in euro zone production for the second month in a row indicates that the downturn is moderating, but it seems too early to say we’ve definitely hit bottom” said Bert Colijn, senior economist for the euro zone at ING.

Despite the improvement, industrial production was down 0.9 per cent in the third quarter, which suggests “that industry was yet again a drag on GDP growth last quarter” said Jessica Hinds, European Economist at Capital Economics.

“We expect the region’s industrial sector to remain in recession well into next year, led by Germany, and weighing on overall economic growth”.

Factory output of food and beverages rose 3.2 per cent in October compared to the same month last year, in contrast with a 6.1 per cent contraction for motor vehicles and 1.4 per cent fall for capital goods.

Consumer goods producers can rely on domestic demand that is still resilient, with falling unemployment rates and rising wages. In contrast, cars and capital goods are heavily affected by new emissions regulations and by trade uncertainties linked to the US-China trade war and Brexit.

The better performance of consumer goods production favoured countries like France whose manufacturing sector is specialised on such goods. Separate Eurostat data show that while German output of machinery and equipment is six times larger than that of France, the latter produces 9 per cent more food and beverages.

As a result of a strong specialisation on export-led capital goods, Germany continued to be a drag on euro zone factories’ output with a 5.3 per cent annual decline in September, compared to a flat reading for France and expansions in a number of countries including the Netherlands and Spain. – Copyright The Financial Times Limited 2019