US sanctions puts future of Aughinish plant in doubt 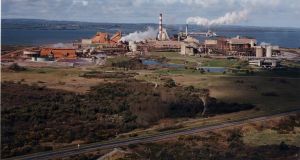 It is a long way from Moscow to the rural Irish outpost of Russian billionaire Oleg Deripaska that supplies as much as 30 per cent of the European alumina market. But Rusal’s giant plant deep in the Limerick countryside has found itself at the centre of the US clampdown against Russia that has Mr Deripaska as one of its prime targets.

For now, production remains in full flow, in defiance of tumbling shares, board resignations, a ban on trade in US dollars and moves by international groups to cut ties with the factory’s parent in Moscow.

But the company this week informed the 450 workers in Ireland that it is now under sanction from the Trump administration, according to local trade union officials, and fears are mounting about how this could hit a major source of support for the local economy.

Smoke billowed from chimney stacks on Wednesday as trucks drove in and out of Rusal’s vast factory, about 20 miles from the city of Limerick. The plant turns bauxite into alumina, which is then shipped to plants across Europe via a deepwater terminal on the Shannon estuary. Once the alumina arrives at its destination it is smelted to make aluminium.

The major issue for Ireland is whether Rusal’s supply chain to the plant will be compromised by the US penalties. Rio Tinto, the miner that is reviewing all trading relationships with Rusal, is the main supplier to the Irish plant of bauxite, its basic raw material. It is not known how this will affect the factory, or whether there are bauxite stockpiles on site to continue working through the sanctions, which come into full-effect in June.

When we see these political headlines between Russia and the US, you don’t immediately associate them with a small place like Limerick. But the reality is that behind such political decrees there are real lives that are going to be affected by this."

Officials in Ireland see the US sanctions as a “serious” threat to the business. The Irish government said that was “working closely” with the company to assess the implications of the penalties against the billionaire Russian oligarch.

“The minister spoke with the CEO this morning, but ultimately this is a global situation that is extremely fluid and continues to develop,” said Ireland’s department of business, enterprise and innovation.

Local management, who declined to return calls, have said nothing publicly of sanctions that have already led the Russian state to offer short-term financing to Rusal should it be needed.

Uncertainty over the plant’s future is one of the far-reaching consequences from the toughest sanctions ever imposed on a Russian business, which have whipsawed through commodity markets and sent traders, bankers and consumers scrambling to assess how deep the contagion will spread.

Rusal’s Irish plant is one of the largest suppliers of alumina to Europe, raising fears about a shortage for the European aluminium industry. Alumina prices have jumped by 27 per cent over the past month because of an outage at a refinery in Brazil.

But, at a much more local level, fears exist about how this will affect Limerick. Staff at the plant have been unwittingly drawn into Mr Deripaska’s struggle for survival in a battle that has plunged Rusal into disarray since Washington imposed sanctions last Friday. He is the most prominent of seven Russian businessmen, 12 companies and 17 senior government officials to be targeted with highly punitive measures in response to the Kremlin’s actions in Crimea, Syria and Ukraine.

“They’ll be liaising with staff as needs arise,” says Alan Douglas, an official with the Connect trade union. “It is a potentially volatile situation. However, it seems to be OK at the moment. Morale seems to be as normal, as if it’s just another day.”

Ray Mitchell, an official with the trade union Siptu, says regular activities continued in Limerick. “Management have spoken to us and as far as they’re concerned its full production as normal. Until we hear otherwise we will continue to work away as usual.”

The situation marks a threat to a success story for Limerick. The factory, open for 35 years, is seen as a shining example of Ireland’s inward investment policy, so much so that it features in the secondary school curriculum. Mr Deripaska bought into the plant in 2006 in a deal with Glencore, the Swiss metals trader that had controlled the site since 1999.

With Limerick in the line of fire, local leaders worry about the damage to a business whose annual wage bill is about €50 million. “It’s frightening,” says Kevin Sheahan, a councillor in Askeaton, the nearest town to the Rusal plant. “It’s a political issue. My initial reaction is that it is totally outside our control. We can only hope that reason will prevail and that jobs will be protected.”

Mr Sheahan, a former mayor of Limerick city and county, says the plant was crucial to the predominantly rural economy. “It has certainly made a contribution to the survival of a lot of our villages and small towns.”

James Ring, chief of Limerick Chamber, a business group, says any threat to the factory could have huge implications. “When we see these political headlines between Russia and the US, you don’t immediately associate them with a small place like Limerick. But the reality is that behind such political decrees there are real lives that are going to be affected by this.”

Staff received a 2.5 per cent pay rise only in January, with the promise of a further 2.75 per cent in 2019 and 2.5 per cent in 2020. Staff at the plant will be watching closely not just what is being said locally by management, but how the situation continues to play out in the White House and Kremlin in coming weeks.

Francie Kenny, an Askeaton pensioner who did building work when the factory was under construction in the late 1970s, says the plant has long been a stable source of good employment. “They’re there for years some of them,” he says of the staff. “There is a bit of a scare on. They’re not certain.” – Copyright The Financial Times Limited 2018

1 HSBC board rethinks overhaul and seeks even deeper cuts
2 ‘Over 1,000’ pubs have interest in Covid-19 insurance test case
3 Fruit and vegetable firm obtains interim court orders against technical manager
4 EU parliament may block fund unless it has grants which do not need to be repaid
5 Reopening economy does not cause coronavirus spike – researchers
6 Will remote working mean an end for the corporate HQ?
7 Pricewatch: Coronavirus has given us four categories of shopper
8 ‘I’ve so many outgoings with family life . . . it puts manners on you’
9 Player Wills site: Hines and APG to seek permission for 416 homes
10 Volkswagen agrees to compensate tens of thousands of German motorists
Real news has value SUBSCRIBE